Some Democrat politicians are even allowing calls from Black Lives Matter to impact policy decisions; defunding the police or reducing funding to local police departments is just one example. 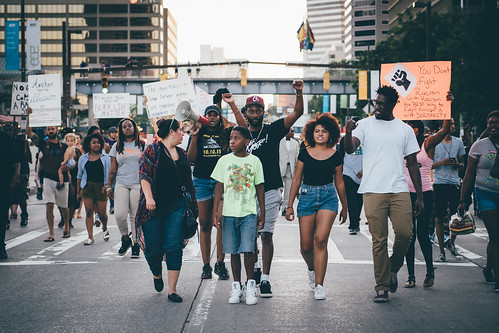 However, not all Americans favor or agree with Black Lives Matter. Some people have criticized the group for setting cities on fire, looting, calling for the death of police officers, and attacking innocents in the streets; other Americans disagree with the narratives of “racism” and “white supremacy” that are consistently espoused by Black Lives Matter.

A couple from California fell into the latter category when they decided to paint over a Black Lives Matter mural with black paint; Townhall reports that these anti-Black Lives Matter demonstrators are now facing a hate crime charge.

Reviewing the Charges Against the Anti-BLM Couple in California

On Tuesday, David Nelson and Nichole Anderson faced three misdemeanor charges for painting over a Black Lives Matter mural in Martinez, California on the 4th of July. A district attorney’s office in Contra Costa County claimed that Black Lives Matter is “an important civil rights cause” that needs respect and attention.

BREAKING: The #Martinez couple caught on video painting over the approved #BlackLivesMatter mural on #FourthofJuly are being charged with a hate crime, according to a release from the #ContraCostaCounty District Attorney's office. pic.twitter.com/9L21byNsE1

One of the three misdemeanor charges against the anti-BLM demonstrators includes a hate crime. Thus far, Nelson and Anderson are liable to face 12 months behind bars due to painting over a Black Lives Matter mural.

On social media, many Americans have weighed in and speculated that charges against Nelson and Anderson are purely motivated by politics.

Backlash Against the Charges

Some Americans have pushed back against the idea that the anti-Black Lives Matter demonstrators committed a hate crime. Others maintained that the mural should not have been placed in the streets, to begin with.

It’s a hate crime to disagree with BLM Marxists?! https://t.co/mJOuCdXW1h

As news about the charges spread, many conservatives have questions about whether disagreeing with Black Lives Matter is what’s being criminalized. Folks on the right have also noted that many individuals who vandalized, tore down, and defaced monuments and statues have yet to be held accountable for their actions.

All in all, those who disagree with the decision of the Contra Costa County district attorney believe that double standards are at play here.

Do you think the individuals who painted over the Black Lives Matter mural committed a hate crime? Enlighten us in the comments section below!