For significant periods of time, members of the Democrat Party managed to successfully skate by without condemning the violent group known as Antifa.

First, the left maintained their silent Antifa support by simply pretending as if the group did not exist. However, as acts of violence increased, keeping up this charade became less and less practical. 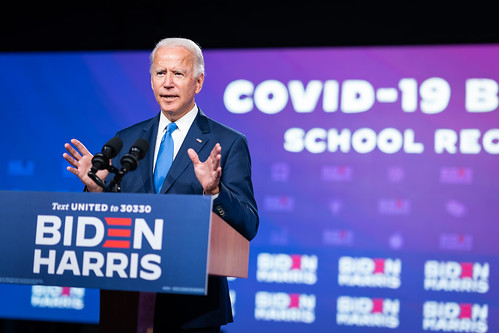 “Briefing and Press Conference Regarding” (CC BY-NC-SA 2.0) by Biden For President

The second attempt to avoid condemnation of Antifa arrived when Democrats described acts of looting, incendiarism, assault, etc., as demonstrations of “peaceful protest.” Amid increasingly more dangerous violence in cities like Chicago, Kenosha, and Portland, Democrats are now unable to escape social and political pressure to rebuke Antifa.

On Sunday, 2020 Democrat Joe Biden came out and begrudgingly asserted his condemnation of the Antifa group, notes Washington Examiner.

What to Know About Biden’s Condemnation of Antifa

Over the past several weeks, the Trump campaign has repeatedly grilled Biden’s lackluster response to riots and destruction in U.S. cities. This led to the Biden-Harris campaign being branded as soft on crime and anti-police.

Such a perception isn’t doing the former vice president any favors. This is why Biden slightly changed his tune on Sunday during an interview with WGAL.

Q: Do you condemn Antifa?

BIDEN: Yes, I do — violence, no matter who it is. pic.twitter.com/dkhlwQn62K

When the interviewer specifically asked Biden if he “condemns Antifa,” the former vice president stated “Yes, I do.” He then added that his condemnation also extends to “violence” regardless of who the perpetrators are.

Shortly thereafter, Biden falsely claimed that President Trump has failed to denounce violence when it comes from the right side of the aisle. This simply is not true, though. In fact, the president has repeatedly spoken out against violence and even offered to work with Democrat leaders to bring an end to it.

Make no mistake, Antifa continues to act as the drivers behind the violence happening in cities like Portland, Kenosha, and Chicago.

While the Democrats offer nearly-forced condemnations of this violence, the Republican Party is taking effective action to ensure the safety of Americans. Last month, the Tennesse governor signed into law legislation that would cause rioters to lose voting rights if convicted.

These laws really pissed off the ACLU…….which means Tennessee did the right thing.

Side note: Tennessee also passed laws a couple years ago that protects a driver if he plows through rioters blocking the road.

Likewise, congressional Republicans are putting forth bills that would block rioters from receiving COVID-19 aid from the federal government. Earlier this year, President Trump signed into law legislation that severely penalizes individuals who are caught vandalizing or destroying federal monuments, statues, and memorials.

Are you surprised that Joe Biden has gone on the record and condemned Antifa? Do you believe his condemnation of the far-left hate group is sincere? Let us know down below in the comments section.