While face masks debates continue across the nation, the clash between government officials in Georgia is getting extra attention.

Georgia Governor Brian Kemp maintains that while he believes residents of the Peach State should mask up, he will not issue a mandate. This led to outrage from Atlanta Mayor Keisha Bottoms and others who believe that Georgians should be forced into face masks whether they like it or not. 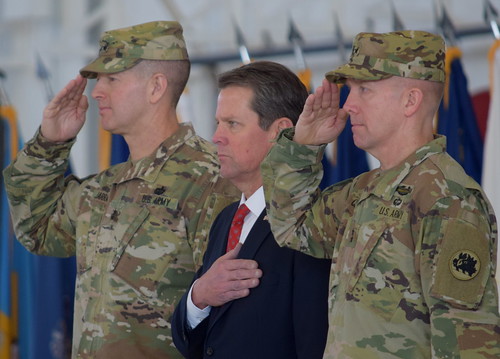 “The Commander in Chief” (CC BY 2.0) by Georgia National Guard

In Kemp’s latest executive order, he banned localities from issuing directives that are stricter than his own; this includes face mask orders.

However, the Atlanta mayor continued with her own local mandate for city residents to mask up; therefore, the Georgia governor slammed Bottoms with a lawsuit yesterday evening, reports Breitbart News.

Georgia Governor vs. the Atlanta Mayor: What You Should Know

Kemp’s suit against the Atlanta mayor states that she has overstepped her legal bounds by requiring face masks in her city.

It’s also important to note that Bottoms’ mandate is in violation of the Georgia governor’s own executive order; as the governor, Kemp inherently has more power and authority than the Atlanta mayor, despite what she may wish for.

This lawsuit is on behalf of the Atlanta business owners and their hardworking employees who are struggling to survive during these difficult times. (1/4) https://t.co/vxiOmteHaH

The governor’s lawsuit specifically points out the provision listing the suspension of local mandates that are more strict than his own. Kemp’s suit comes after his latest executive order and rage from certain local leaders who favor forced, compulsory face coverings.

Response from the Atlanta Mayor

Needless to say, Bottoms is not happy about the lawsuit against her. Nevertheless, she has no legal power or authority to override orders from the Georgia governor.

Instead, the Atlanta mayor has accused Kemp of placing “politics over people.” Since the lawsuit against her, Bottoms has attempted to downplay the nature of her local mandate for Atlantans to wear masks. On her social media accounts, the mayor accused Kemp of suing her for “RECOMMENDED guidelines.”

However, this is factually inaccurate. The Atlanta mayor did, in fact, issue a mandate “requiring” city residents to wear face masks. This is why she is facing a lawsuit from the Georgia governor.

In addition to trying to force a mask mandate, Bottoms has also attempted to bring the city of Atlanta back to the first phase of reopening. This, too, is not legally enforceable, as noted by Georgia Governor Brian Kemp.

What do you think about the Georgia governor’s lawsuit against the Atlanta mayor? Do you believe the government should be able to force Americans into wearing face coverings? Let us know down below in the comments section.