Trump rallies have been a thorn in the side of the left for quite some time. Even prior to COVID-19, Democrats slammed Trump rallies, even comparing them to the likes of KKK gatherings.

Now, as the nation gradually bounces back from coronavirus, Trump rallies are yet again under attack from the radical left. Critics have accused the president of being reckless for holding rallies, even as America makes its return to normal. It’s important to note that Trump did temporarily pause his rallies during the height of COVID-19 cases. 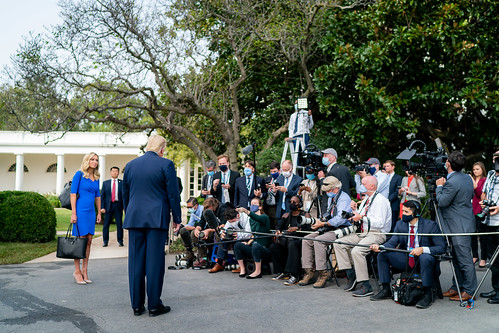 The Biden campaign, however, has taken criticism of Trump rallies to a new height. On Tuesday, Jennifer O’Malley Dillon, Biden’s campaign manager, falsely stated that Trump’s rallies will lead to the deaths of Americans, reports Fox News.

The Truth About the Left’s Fear of Trump Rallies

During a conversation with Politico, Dillion alleged that “people will die” because they attended Trump rallies or gathered to hear him speak at a roundtable event.

The Biden campaign manager didn’t cite any statistics or basis to show that Trump rallies will lead to the deaths of Americans; however, Dillion did note her “horror” to see Americans without face coverings and in large groups.

After being introduced by Luis Fonsi, Joe Biden pulled out his phone and started playing Despacito ahead of his remarks kicking off Hispanic Heritage Month in Kissimmee, FL. pic.twitter.com/7R6hUZgLW1

While Biden’s campaign manager remains highly critical of the president’s rallies, she has yet to address the issues that her own boss is facing. Both the Democrat nominee and Kamala Harris, his running mate, have cited a possible election win as the “Harris-Biden administration.”

The Trump 2020 Campaign on Rally Attendance

Ultimately, a decision about whether or not to attend a Trump rally is up to each individual; this is something that President Trump’s re-election campaign has repeatedly stated. At multiple Trump rallies, campaign staffers have handed out face masks for attendees to wear, if they so choose.

Attendance at various Trump rallies across the nation has highlighted the strong support that President Trump has. Photos and videos online show thousands of eager fans cheering for the president and even camping outside of his planned speaking venues ahead of time.

Great to be back in Philadelphia. Thank you Pennsylvania, see you again soon! #MAGA pic.twitter.com/l82C4TdlAE

Even anti-Trumpers on the left have admitted that enthusiasm for the president outweighs interest in Joe Biden. This would explain the real reason that so many Democrats abhor the president’s campaign rallies.

Do you believe that President Trump’s campaign rallies are causing Americans to die? Why do you think the left truly feels so threatened by Trump rallies? Let us know down below in the comments section.