To say that Biden had a rough day would be an understatement. The former vice president made several cringe-worthy gaffes; these gaffes also followed the criticism Biden has already gotten for outrightly declaring that voters don’t “deserve” to know whether he supports or opposes packing the Supreme Court. 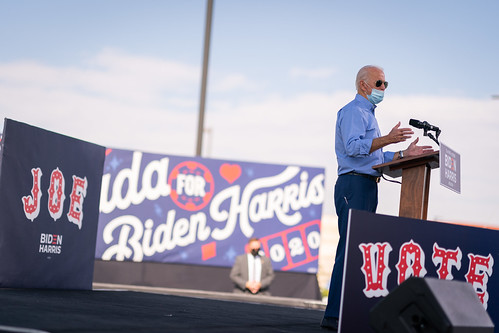 While in Ohio, Biden gave a speech, professing himself to be a “proud Democrat” running for Senate, rather than the presidency. Biden also forgot the name of Republican Sen. Mitt Romney; in a bid to get Ohioans to vote (for him), the former vice president told his small audience to visit “IWill.com/Ohio.” Of course, this website does not exist.

Biden’s Monday worsened during an interview with WKRC Local 12 in Cincinnati, as Breitbart News explains. During this interview, the Democrat nominee remarked that the 56% of Americans who view themselves as better off under Trump suffer from memory issues and shouldn’t vote for him.

Reviewing Biden’s Dismissal of 56% of Americans

Many surveys and polls have shown that when it comes to the economy, Americans trust Trump more than Biden. This is a matter that the former vice president contributed to with his admission that he’d shut down the U.S. economy again as president.

While in Cincinnati, Biden was questioned on 56% of Americans who believe that they are better off now than they were four years prior when President Obama was still in office.

Joe Biden insults the 56% of Americans who say they are better off today than they were 4 years ago, says they have bad memory and they should NOT vote for him. pic.twitter.com/8DnIOcfW9f

Rather than defend his own economic record, Biden insulted Americans with this outlook. Per the Democrat nominee, these voters are simply suffering from a “not very good” memory. The former vice president then stated that 56% of Americans who feel this way about their standing now vs. four years prior should not vote for him.

Biden then took aim at how President Trump has responded to COVID-19.

A Pattern of Insulting Voters

Monday didn’t mark the first time that Biden has insulted voters and it’s unlikely to be the last.

Even before coronavirus shutdowns, Biden had several clashes with voters who challenged him on his policies and record. The Democrat nominee once referred to a college student as a “lying dog-faced pony soldier.” He then told a Michigan union worker that he “doesn’t work for [the union worker]” before referring to the man as “full of sh*t.”

It’s no surprise. Remember when Biden told an American union worker he doesn’t work for him? pic.twitter.com/Xc92ro0BN8

Months ago, Biden also infamously declared that if African-American voters are struggling between whether to support him or Trump, then they “ain’t black.”

Many Americans have come to learn that Biden’s nice guy facade quickly vanishes when he, his policies, or record are challenged.

Do you think insulting 56% of Americans was a wise move for Joe Biden? Let us know your thoughts about his behavior in Ohio down below in the comments section.