Over the 2020 presidential election, Joe Biden has made very clear his position on law enforcement.

Weeks ago, the former vice president admitted that he would “redirect” money from police departments as commander-in-chief. 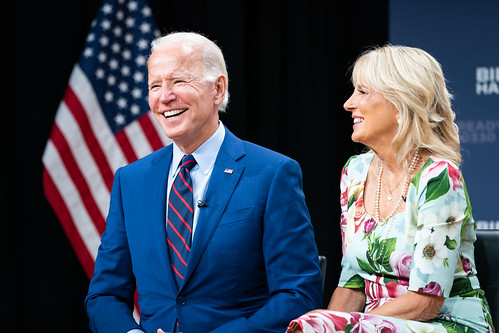 When critics noted that a “redirection” of funding is the same as defunding the police, Biden attempted to walk things back. Towards the end of last month, the former vice president claimed that he is not, in fact, supportive of defunding law enforcement.

All-in-all, significant segments of the law enforcement community are rallying behind President Trump. This is something that Biden strived to change this weekend, when delivering a speech before the National Guard, according to Breitbart News.

What to Know About Biden’s Appeal to the National Guard

On Saturday, the former vice president promised members of the National Guard that he would never place them in the center of “politics or personal vendettas.”

Biden then alleged that electing him into office constitutes a guarantee that the military won’t be weaponized to infringe upon Americans’ rights; although, many Americans have qualms about whether or not the former vice president is being truthful.

Biden demonstrates he really has no idea what is happening right now.

A) National Guard is being sent in to stop rioters, not peaceful protesters. Biden is dangerously conflating the two.

B) Wisconsin’s DEMOCRAT Gov. asked for National Guard to come in! pic.twitter.com/QU0ItuLY9m

During Biden’s speech before the National Guard, he also continued his work to villianize President Trump. Biden alleged that Trump’s construction of the Southern border wall denied the National Guard necessary resources; not long after this untrue claim, the former vice president also conflated dangerous rioters with peaceful protesters.

Where Law Enforcement Stands in the 2020 Presidential Election

Despite Biden’s best efforts, he is not exactly winning over the law enforcement community in this country.

Several police groups and other law enforcement bodies have openly endorsed President Trump’s re-election. The president has earned this support due to his policies that allow police officers to do their jobs; Trump’s vocal rhetoric and promise to never defund the police have also earned the support and respect of the law enforcement community.

.@JoeBiden's speech on violence was too little too late. Nobody is being fooled on your stance on violence. If he was sincere he would be urging Democrat governors & mayor's to let President @realDonaldTrump send in the National Guard. It's just that simple. Retweet if you agree. pic.twitter.com/OR7l7GfQyn

In spite of the overwhelming support for the president, Biden repeatedly attempted to convince the National Guard that he is “on [their] side.” Certain critics of the former vice president believe that if he were truly serious about supporting the National Guard, he’d want them able to do their jobs in cities that need them.

What do you think about Joe Biden’s attempt to win over the National Guard? Are you buying the talking points shared by Biden in his speech? Be sure to let us know in the comments section below!