Last week, President Trump informed Americans that a vaccine for COVID-19 may hit the market as early as next month. The president explained that such a vaccination is part of “Operation Warp Speed” and that developers remain hard at work.

Prior to Trump’s announcement, other potential timeframes for the COVID-19 vaccination’s release included next year and even this winter. 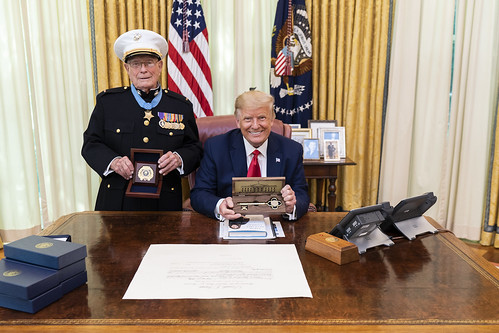 Due to the extent to which coronavirus and its mitigation strategies have been politicized, Democrats are already weighing in, notes Fox News.

Right now, Biden running mate Kamala Harris is accusing President Trump of silencing the voices of healthcare officials due to the 2020 presidential election.

Harris on Trump and the COVID-19 Vaccine

On Saturday, Biden’s running mate sat down for a CNN interview with host Dana Bash. During this time, Harris disparaged the president in response to news that Americans may have access to a vaccine in October.

According to the California senator, she would not “trust Donald Trump” on the safety of the coronavirus vaccine. Furthermore, Harris maintained, without evidence, that the president is somehow actively working to “muzzle,” “sideline,” and “suppress” voices within the medical community.

Sen. Kamala Harris tells @DanaBashCNN she would not trust Donald Trump on a coronavirus vaccine, but adds she "would trust the word of public health experts and scientists," including Dr. Anthony Fauci. #CNNSOTU

Watch the full interview on @CNN on Sunday at 9 a.m. ET. pic.twitter.com/hxXVyQ0AQg

After making these claims, Biden’s running mate then went on to assert that President Trump has not displayed leadership skills amid COVID-19. Despite Harris’ claims that the president is working to silence the medical community, healthcare officials have repeatedly lauded Trump’s response and management of coronavirus.

The Trump Campaign on COVID-19

Rather than sharing mistruths with the American people, President Trump remains focused on facts.

On Saturday, the Trump campaign put out a new ad centered on the progress made as America works to come back from COVID-19. Aside from the ongoing production of a vaccine, the Trump campaign’s 30-second ad shared insight into job gains and other data signaling a fruitful economy to come.

The president’s re-election team also made a point of calling out Biden and alerting Americans about the danger to come if he wins the election.

Thus far, the former vice president has yet to present a concrete plan for how he thinks the economy should be restored; however, Biden has gone on record and admitted that he’d completely close the nation if specialists told him to do so.

Do you believe that President Trump is “muzzling” the healthcare community? What do you think about the Trump administration’s work to restore jobs and the economy? Let us know your take down below in the comments section.