Anti-police sentiment in the United States is skyrocketing. Following the Memorial Day death of George Floyd in police custody, countless individuals embraced the untrue narrative that the entirety of law enforcement is evil and out of harm people of color.

As violence, carnage, and riots plague the streets of America, demonstrators are showing their disdain for police officers. Some anti-police sentiment has been graffitied on buildings and monuments; other rioters are exercising other means of opposing law enforcement. 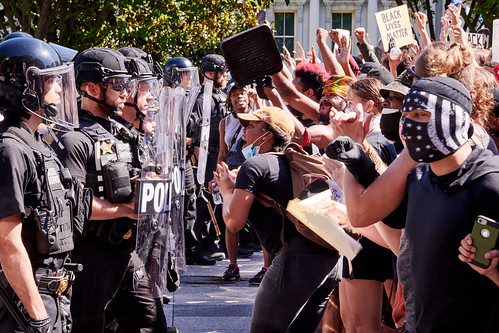 Townhall confirms that demonstrators gathered outside of the home of Los Angeles Mayor Eric Garcetti and called for the defunding of the Los Angeles Police Department.

Reviewing the Campaign to Defund the LAPD

Following the approval of the Los Angeles city budget, Black Lives Matter determined that this budget was not to their liking. Apparently, the funding of the city’s police department is undesirable to the left-wing organization.

Posts on Twitter shed light on a “secret protest” happening at the home of Mayor Garcetti. Black Lives Matter subsequently visited the residence of the Los Angeles mayor, demanding that he scrap funding for the city’s police department.

See it for yourself:

Activists with Black Lives Matter LA have led a demonstration to defund the LAPD outside Mayor Garcetti’s home in Hancock Park and is asking more individuals to show up to join the rally. pic.twitter.com/JFyyiulz01

Thus far, Mayor Garcetti has not indicated that he has any plans to defund the Los Angeles Police Department. However, these displays of hatred for law enforcement rival previous demonstrations like never before.

In the aftermath of George Floyd’s murder, countless officers and law enforcement groups have come out and stated that the actions of four officers don’t represent the entirety of the police force. Nevertheless, Black Lives Matter and other rioters remain intent upon hating and vilifying those who are sworn to protect and serve.

What do you make of Black Lives Matter’s demand to defund the Los Angeles Police Department? Don’t hold back your thoughts in the comments section below!