The demands of Black Lives Matter are getting increasingly more extreme and absurd. Right now, the far-left group seeks to defund police departments across the nation.

Not only is this reckless, but it’s also incredibly dangerous and will only engender more crime. Then again, considering Black Lives Matter demonstrators’ propensity for looting, rioting, and setting buildings ablaze, their desire to not face legal consequences for their actions is understandable. 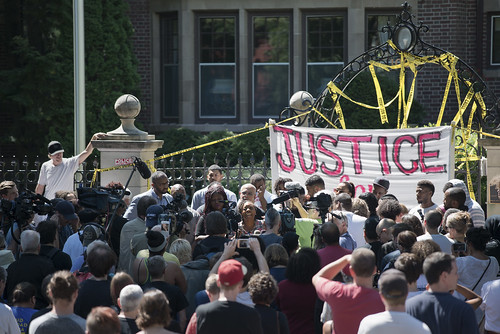 “Protest in response to the Philando Cast” (CC BY 2.0) by Fibonacci Blue

As Democrat leaders shamefully bow to the mob, the demands aren’t coming to an end; as a matter of fact, they’re only just getting started. New developments from Breitbart News confirm that Black Lives Matter is now ordering the city of Boston, Massachusetts to spend $15 million on illegal aliens.

What to Know About Black Lives Matter and Illegal Immigration

The $15 million dollars that Black Lives Matter wants Boston to spend on summer jobs for illegals will inevitably come from taxpayers. According to Black Lives Matter Boston, the city mayor should reduce police funding by 10%; then these funds should be “reinvested” into communities of color.

Yes, we must #DefundPolice. We cannot reform a system designed to brutalize and exploit Black people. We must dismantle it. We do that by removing its financial power.

It's time we unpack how police and prisons are funded.

Part of this reinvestment pertains to summer jobs for individuals who unlawfully entered this country. The irony of this is that such a measure actually works against the black lives that Black Lives Matter claims to support. Countless research and studies have affirmed the link between illegal immigration surges and higher unemployment rates for black Americans.

Ultimately, only time will tell whether or not the Boston mayor caves to the demands of the radically left group that is Black Lives Matter.

Do you think the city of Boston should spend $15 million dollars on “summer jobs” for illegal aliens? How much longer will Democrats bow and cave to the far-left demands of Black Lives Matter? Let us know down below in the comments section.