Black Lives Matter continues to engage in their typical actions of looting, burning, and plundering communities when they don’t get their way.

Americans witnessed this as recently as yesterday, following the announcement that no Louisville police officers will be charged in the death of Breonna Taylor, a deceased woman who helped her boyfriends traffick drugs from her own home.

It doesn’t matter at all to them that she was knee deep in trafficking, was fired from her job, had been on police surveillance, was ON the warrant, bailed out drug traffickers multiple times, and that her boyfriend shot at cops first?

Of course, the prior investigation into Taylor’s death showed that police officers knocked on her door to announce their presence and a warrant. At this point, Taylor’s boyfriend opened fire on police officers; Louisville police officers subsequently returned fire, and Taylor simply got caught in the crossfires.

Despite Black Lives Matter’s propensity for destruction and violence, there are still certain organizations and places that remain determined to support them anyway. The decision to support Black Lives Matter sorely backfired on a school board in Michigan, hence prompting them to revoke this support, according to Breitbart News.

Like many other institutions, Mona Shores Public Schools immediately jumped the gun and recently issued a statement affirming their support for Black Lives Matter.

The statement involved the school board vowing that their educational facilities would be “safe spaces for dialogue and support” regarding matters talked about by the Marxist organization.

Mona Shores Public Schools may have forgotten these things, but members of the community did not.

After backlash, the school board quickly rescinded their Black Lives Matter support. They also issued a new statement, claiming that the original support for the Marxist organization wasn’t “an issue of politics,” but rather of “equality, inclusion, acceptance, and equity.”

The Truth About Black Lives Matter

Black Lives Matter continues to engage in various acts of looting and destruction when they don’t obtain the outcomes they want. The shooting of two police officers during Louisville riots last night is just the latest example. 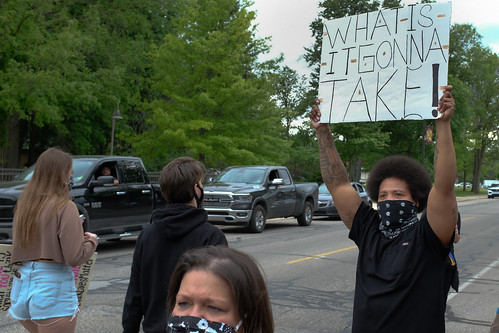 “Protest for Justice, March for Peace” (CC BY-ND 2.0) by dangaken

After months of social unrest in various cities, polls have shown that national support for Black Lives Matter is dropping; moreover, a growing number of Americans are coming to recognize that there is, in fact, a war against police officers with Black Lives Matter leading the charge.

Are you glad that the Mona Shores school board withdrew their support for Black Lives Matter after community residents spoke up against it? Let us know down below in the comments section!