Throughout the president’s time in office, he’s repeatedly worked on behalf of law enforcement. Since the rise of the Defund the Police movement, the president has also let law enforcement know that the police will never be defunded so long as he is in power. 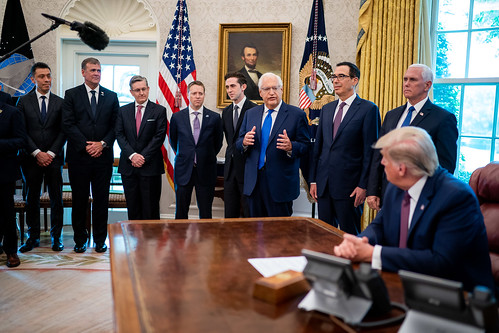 Last week, the president talked about some of his plans for a second term in office while campaigning in different parts of the country. Ensuring that police officers are protected and able to do their jobs are both measures that Trump has vowed to take.

The law enforcement community repeatedly praises the president for coming to the defense of officers. Chicago’s Fraternal Order of Police has now joined the increasingly long list of law enforcement associations to back Trump’s re-election campaign, according to Breitbart News.

John Catanzara, president of Chicago’s Fraternal Order of Police, spoke clearly and concisely about Trump. Catanzra confirmed that he’ll do whatever is possible to aid the 45th president.

Moreover, the law enforcement leader also acknowledged that while some Democrats will disagree with the Chicago Fraternal Order of Police’s endorsement of Trump’s campaign, others will note that the president’s policies are a help, not a hindrance, to law enforcement.

Chicago‘s Fraternal Order of Police Endorses Donald Trump for Reelection https://t.co/KsDjK2rufh via @BreitbartNews. Thank you to John Catanzara and Chicago’s FOP. I will never let you down!

Catanzara also drew attention to the ways in which Democrat leadership has hurt communities and police. After pointing this out, the Chicago Fraternal Order of Police president explained that four more years of Trump in office is necessary to “make us a prosperous society.”

More News on the Trump Campaign

Yesterday, the president traveled to Minden, Nevada to host another campaign with supporters.

During this time, Trump talked about policies, the election, and the importance of keeping America on the right track. The president also let his Nevadan supporters know what the country will look like under another term of his leadership as opposed to having Joe Biden in the Oval Office.

Needless to say, Trump supporters in Nevada were absolutely thrilled to see the president. Giant, passionate crowds were waiting for him with fans donning pro-America and MAGA attire and signage. The enthusiasm for Trump in Nevada mirrors the reactions he’s gotten in other states when traveling for rallies.

What do you think about the Chicago Fraternal Order of Police’s decision to endorse President Trump? Let us know in the comments section below!