Last month, the famous Justice Ruth Bader Ginsberg passed away. This left a vacant seat with the Supreme Court and prompted leftist meltdowns when Democrats learned that President Trump would move forward with a nominee to fill the empty seat. 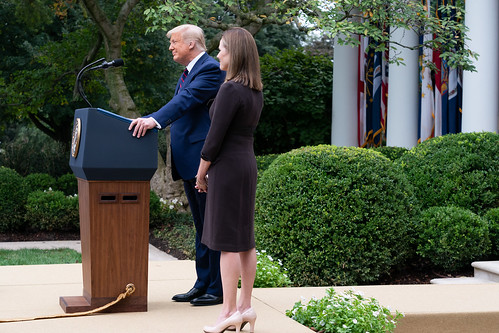 That nominee turned out to be Judge Amy Coney Barrett. This nomination immediately triggered Democrats; following Barrett’s nomination, the left came out with all kinds of conspiracy theories and reasons why they believe Barrett shouldn’t make it on the Supreme Court.

Republicans, however, threw their full support behind Barrett. As of this morning, the confirmation hearing for the president’s nominee began, according to Fox News.

A Closer Look at the Confirmation Hearing for Amy Coney Barrett

Barrett’s confirmation is being held by the Senate Judiciary Committee. During this period, Barrett will face various members of the Senate and answer a series of questions regarding different political matters and how she’d deal with various issues.

Already, Democrats in the Senate are expected to question Barrett on policies where they worry about decisions she’d make, such as abortion and healthcare. Left-wing senators have also made no bones about their concerns that Obamacare will disappear entirely if Barrett is, in fact, confirmed to serve on the Supreme Court.

It’s the only way they know! https://t.co/zVBuie6FTk

Republicans, however, see these concerns as confirmation that even Democrats know Obamacare is unconstitutional. Earlier in President Trump’s first term, he took action to effectively eliminate the dreaded and controversial individual mandate.

Republicans are more than eager to have Barrett fill the vacant seat within the Supreme Court. Certain GOP senators, such as Texas Republican Ted Cruz have warned that a constitutional crisis will befall the United States if Ginsberg’s seat remains empty by the time Election Day rolls around.

The confirmation hearing for Amy Coney Barrett arrives as Democrats still refuse to answer questions on whether or not they plan to pack the court if they win the general election.

The Republicans are giving the Democrats a great deal of time, which is not mandated, to make their self serving statements relative to our great new future Supreme Court Justice. Personally, I would pull back, approve, and go for STIMULUS for the people!!!

Joe Biden recently came out and stated that he doesn’t believe voters are deserving of knowing where he stands on the matter of packing the court. This has not gone over well with the press or with many voters across the nation.

What do you think about the confirmation hearing for Amy Coney Barrett so far? Don’t hesitate to let us know your opinions and perspectives in the comments section below!

DeSantis Sued Over What Biden’s Been Doing for Over a Year!