Presently, Democrat nominee Joe Biden is running as a candidate who will save America. This is the message that he, his election campaign, and political allies continuously put out. 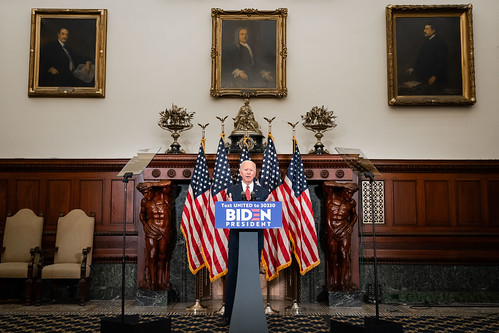 “Press Conference in Response to Protests” (CC BY-NC-SA 2.0) by Biden For President

The pro-Biden talking points assert that President Trump has ruined the nation, worsened COVID-19, and engendered current social unrest. Biden and his allies haven’t provided concrete evidence to support these accusations against the president; however, the former vice president has maintained that electing him will make people’s problems go away.

On the heels of the Democratic National Convention’s final night, Democrats are now pushing Biden as the savior of working-class America, as documented by Washington Examiner.

Right now, Democrats are telling Americans that electing Biden will improve the plights of the working-class. During the Democratic National Convention, former 2020 Democrat Cory Booker stated that Biden will increase the minimum wage, a measure touted by Democrats as positive for Americans.

Watch his full speech at the #DemConvention 🇺🇸 https://t.co/bvtU9Ryh9x pic.twitter.com/wwlsEnJvRL

In additional remarks, the New Jersey senator also stated that the working-class and middle-class are “under attack” in Trump’s America. Booker claimed that income disparities are only increasing and, therefore, prompting a need for a higher minimum wage.

When businesses are forced to spend greater amounts of money on labor, employees typically wind up with reduced hours to offset the difference; another common outcome is the altogether layoff of workers, hence shuttering the hours and income they had prior to the minimum wage increases.

May history be able to say that the end of this chapter of American darkness began here, tonight as love and hope and light joined the battle for the soul of the nation. pic.twitter.com/Pdk8c75ATr

Increasing the minimum wage typically bodes very poorly for small businesses. In many cases, small businesses cannot afford the extra expenses; in the worst-case scenario, the businesses could shut down altogether. This, of course, has rippling, negative impacts on the business owners, workers, and community at large.

These are very real pointers that Sen. Cory Booker did not mention while endorsing Biden and calling for an increased minimum wage.

Do you believe that Joe Biden is a savior of working-class Americans? Is raising the minimum wage truly helpful to workers, business owners, and communities? Don’t hesitate to share your thoughts with us down below in the comments section.