The presence of COVID-19 has served as a major game-changer, especially in the political world. As the nation looks to return from the devastating economic impacts of a shutdown, there is still more work to be done.

Coronavirus has become a pivotal subject matter in the 2020 presidential election. Joe Biden is using COVID-19 and subsequent economic fallout as talking points to woo voters. The Biden sales pitch maintains that electing him as president will lead to a restored economy. In addition, the former vice president continues to attack Trump’s response to the virus. 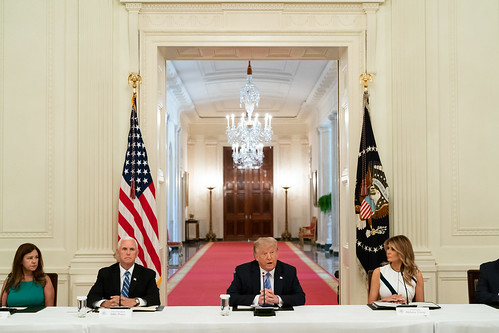 Virtually all of the nation’s top and most prominent Democrats have endorsed Joe Biden for president. Now, information from Breitbart News confirms Democrats’ hope and belief that the fallout from coronavirus will tank Trump’s chances at a second term.

A Closer Look at Democrats’ Hope for the 2020 Presidential Election

The four elements that Democrats believe will work against Trump in the 2020 presidential election are COVID-19, social unrest following the death of George Floyd, economic decline following COVID-19, and the president’s unorthodox’s social media usage.

Despite this, the nation’s economy is gradually seeing a comeback. The unemployment numbers are declining each week; some businesses are reopening their doors and last month marked a record number in job gains.

Right now, Democrats’ play is to present themselves as the solutions to social unrest and economic decline. Trump and his allies have rapidly pushed back on this play, however; conservatives regularly note that Democrat leaders failed to act accordingly when riots and other forms of illegal activity broke out on the streets.

The president’s supporters also remain critical of Democrats’ fiscal policies which they believe would devastate the economy and wipe out post-coronavirus progress.

Beyond the Presidential Election

Democrats’ hopes of victory are not merely limited to their interest in defeating Trump. On top of this, folks on the left maintain that coronavirus and the subsequent fallout could aid Democrats in expanding their House majority and regaining power in the Senate.

Republicans, on the other hand, have a very different outlook. The GOP believes that the left’s lackadaisical and permissive attitudes towards violent riots and the destruction of monuments will backfire.

Joe Biden has adopted the policies of the Radical Left – he'll never fight for America First!

“You don’t have to guess what a Joe Biden economy would look like. We’ve already seen it for 8 years. Depressed wages, jobs leaving this country going to other nations….” pic.twitter.com/fJC1g4j4UO

The president himself has swiftly moved against individuals who damage federal monuments, memorials, and statues; in doing so, Trump signed an executive order that gives a ten-year jail sentence to individuals who attempt to deface these figures.

Do you think Democrats will be able to use coronavirus fallouts to their advantage during this election cycle? Let us know in the comments section below!