The idea of reparations is something that Democrats have talked about for quite some time. In doing so, the left argues that African-Americans are owed monetary compensation for slavery; this comes in spite of slavery ending more than 200 years ago.

As Democrats put together various reform proposals, reparations are still on their minds. Many people have questioned the logistics and merits of racial reparations; however, this is something that Democrats intend to stand by. 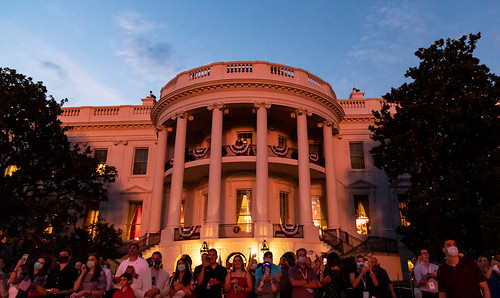 “Salute to America 2020” (Public Domain) by The White House

Fresh updates from Breitbart News show that Senate Democrats are seeking $350 billion dollars for reparations. A significant part of the proposed funding would also go towards dealing with “systemic racism” and “underinvestments” in non-white communities if leftist legislators get their way.

The Push for $350 Billion Dollars in Racial Reparations

Senate Democrats are branding their proposal as an “important down payment” for communities of color. In doing so, leftist lawmakers aim to devote the hundreds of billions of dollars towards expanding Medicaid, providing tax credits, and more.

Democrats in the Senate also make the case that “systemic racism” has held back racial minorities from opportunities in society.

This is a historic commitment by the federal government to address systematic racism and decades of underinvestment in communities of color. pic.twitter.com/MgBpVoHfep

Sen. Chuck Schumer, in a statement, denounced what he claims as “structural inequalities” in institutions that manage the healthcare and education systems, housing, and more. Therefore, Schumer and other Democrat senators believe that a $350 billion dollar policy plan will right the wrongs they allege are facing communities of color.

Another talking point behind this proposal asserts that coronavirus has highlighted and magnified “systemic racism” in the United States.

Where Would The Money Come From?

There are many people who do not agree with the left-wing narrative that America is a racist nation that “systemically” holds back people of color. This is one important point of contention pertaining to the plan that Democrats in the Senate are pushing for.

We can get COVID-19 much more under control if we all wear one.

However, another issue deals with logistics. $350 billion dollars is no small sum, especially at a time when many Americans are not working and instead fighting to survive. It also doesn’t help matters that the federal government is struggling to put together funding for a second round of stimulus payments. Some congressmembers in Washington claim that the money simply isn’t there.

Do you think that Congress should pass a $350 billion dollar plan for racial reparations? Do you truly believe that our nation is plagued with “systemic racism?” Let us know down below in the comments section.