The issue of face coverings continues to be a matter that dominates national conversations. Amid news that President Trump tested positive for COVID-19, the Biden campaign has increased calls for federal mask mandates.

Despite the Democrat Party’s strong support for mandatory masking, Americans continue to reject this. Since the inception of mask edicts, folks across the country have demonstrated in protest against these orders. In September, business owners in Alabama sued the state’s Republican governor for her statewide mask mandate. 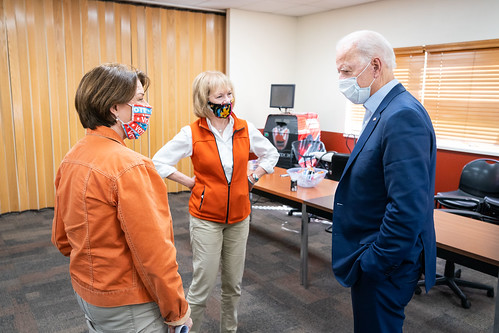 Other governors and politicians are also facing constitutional pushback as a result of their mask orders. Nonetheless, the Democrat Party remains committed to getting every American into a face mask.

On Saturday, Joe Biden lashed out at the Department of Transporation (DOT) over the body’s decision not to compel travelers to wear face coverings, reports Fox News.

The U.S. Department of Transportation vs. Joe Biden

On Saturday, the Democrat nominee stated that forced masking has nothing to do with “freedom,” but instead heralds “patriotism” to America. This is a take that many Americans disagree with; in fact, countless individuals assert that using the government to force people to conceal their faces is an act of tyranny, rather than patriotism.

Nevertheless, though, Biden proceeded with censure towards the Transportation Department. The former vice president zinged the DOT for “stupidly [rejecting] a petition” that would mandate users of public transportation to wear face coverings.

After slamming the decision as “appalling,” Biden professed that a Department of Transporation under his administration would force Americans into face masks, whether they like it or not.

As the former vice president promoted mandatory masking yet again, he did not speak about “mask mouth” and acne complication, both health issues that are linked to consistent use of face masks.

At this moment, we’re facing unprecedented crises. But I know the American people have what it takes to overcome them.

There’s not a single thing beyond our capacity.

Biden asserted that the president has deprived workers in the transportation sector of access to the right amount of personal protective equipment (PPE). The Democrat nominee then went on to falsely claim that Trump left the burden of PPE provision strictly on state leaders, local leaders, and business owners.

Do you believe the Department of Transportation should require travelers to wear face coverings? Have forced masking talking points become akin to beating a dead horse? Let us know down below in the comments section!