Many of the president’s enemies make a habit of sharing questionable to downright outlandish claims about him.

The American people have witnessed this over and over again. Throughout the 2020 presidential election alone, anti-Trumpers have repeatedly called him racist, xenophobic, bigoted, sexist, etc., in spite of absolutely no supporting evidence. 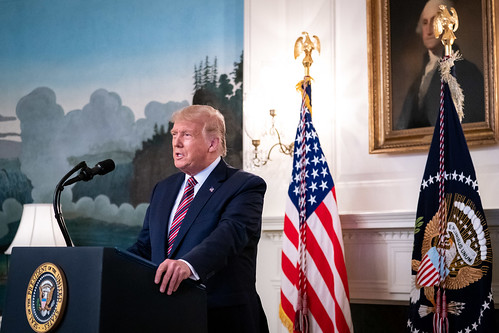 Michael Cohen, a felon, former Trump fixer, and now disgraced attorney, has continued to make baseless claims about the president. As most Americans remember, Cohen rapidly turned on Trump following an FBI investigation that exposed Cohen’s involvement in tax fraud, campaign finance violations, and the works.

Now, the former Trump lawyer is back with new accusations against the president of the United States, notes Washington Examiner.

Many of the president’s political enemies have suggested that he doesn’t plan to leave the White House when it’s time for the next commander-in-chief to arrive. While Democrats are hoping that this time arrives in January 2021, polls show that more Americans believe Trump will win another four years in office.

However, Cohen appeared on CNN yesterday to spread various rumors about Trump. According to the president’s former fixer, Trump sees himself as “the ruler, the dictator” of America.

🚨 I’m launching a podcast #MeaCulpa this Monday 9/14. Only I can give you an insider POV into the most divisive and dangerous mind in American history through honest weekly discussions about the state of our country 🇺🇸🎙 Subscribe now -> https://t.co/ovCXd1HnoP @ApplePodcasts pic.twitter.com/H94iLSQ0Ma

Cohen did not offer any evidence to support this assertion; he did, however, go on to claim that Trump would attempt to alter the United States Constitution for a third or fourth term in the White House.

The former Trump fixer’s accusations against the president go on and on. Cohen also appeared on MSNBC with claims that Trump’s policies are merely a smokescreen. For instance, the ex-Trump attorney asserts that the president is actually pro-choice rather than pro-life.

Like other claims espoused by Cohen, the assertion of Trump being pro-choice simply doesn’t align with reality. The president has repeatedly appointed pro-life judges, enacted pro-life policies, etc.

BREAKING: In a letter to the Pro-life Community, President @realDonaldTrump vows to FULLY defund Planned Parenthood of tax-payer dollars when he is re-elected in November.

When questioned on the basis of the assertion that the president is pro-choice, Cohen merely stated that he and Trump “discussed” the matter over a course of several years.

The Trump fixer continues to appear on various left-wing media outlets to promote his book about the president, along with an upcoming podcast.

What do you think about the latest claims that Michael Cohen makes about President Trump? Is the former Trump fixer a credible source? Let us know down below in the comments section.