Last month, President Trump’s campaign announced a temporary pause on advertisement due to the arrival of a new campaign manager.

Mainstream media outlets and others jumped upon this news, using it to question the Trump campaign’s confidence about winning in November. This narrative spread despite Team Trump 2020 stating that they’d be back soon to continue exposing Biden, his campaign, and why re-electing the 45th president is the right call. 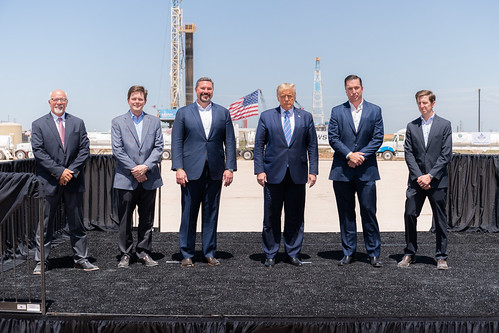 “President Trump in Texas” (Public Domain) by The White House

Fox News confirms that the Trump campaign is now back with ads; however, these ads are specifically geared towards early voting states like Georgia, North Carolina, Florida, and Arizona.

A Closer Look at the Return of Trump 2020 Ads

In the newest Trump 2020 ads, Americans are given a front-row seat to what a Biden presidency would look like. Tax increases, defunding the police, etc., are only the tip of the iceberg. The latest Trump 2020 ads display just a snapshot of the many negative impacts that would follow Biden having power in the White House.

The Radical Left has taken over Joe Biden and the Democrat Party.

The former vice president’s ties to radical progressives are also explored in the newest Trump ads. Biden remains politically in bed with far-leftists like Elizabeth Warren, Bernie Sanders, etc., despite his attempts to come off as a moderate Democrat.

Another ad also sheds light on the “silent majority” that largely comprises the president’s base. Many Trump supporters are referred to as the silent majority who make their voices heard at the polls, rather than in the streets.

More on the 2020 Presidential Election

New ads from the Trump campaign will certainly carry weight in the 2020 presidential election. It will be interesting for many Americans to see whether or not ads or messaging from Joe Biden’s campaign are modified to counter the president.

"I’m afraid to say this out loud…" pic.twitter.com/4OzFPjSWMX

Already, Biden is facing calls from the left to renege on debating the president. As the 2020 presidential election continues, the heat will only get more intense. Already, the idea that Biden cannot truly handle himself is floating around.

The former vice president’s seeming avoidance of direct and unfiltered interactions with the press has only fueled the aforementioned ideas. Whether or not Biden follows through on his commitment to three debates against the president will also speak volumes.

What do you think about the Trump campaign’s latest 2020 political ads? How do you think Joe Biden’s campaign will respond to or counter the shared messages? Let us know down below in the comments section.