The final presidential debate raked in approximately 63 million viewers on Thursday night. Americans tuned in and saw Trump and Biden debate issues like healthcare, election integrity, the proper COVID-19 response, and much more. 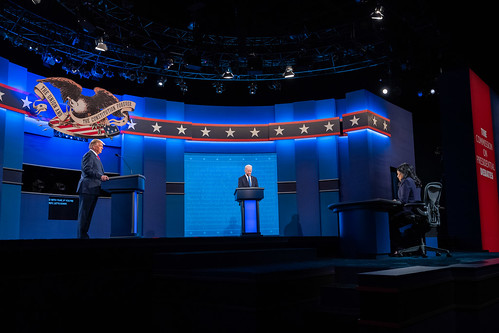 Following the debate earlier this week, conservatives lauded the president’s performance. Even undecided voters stated that Trump came off as “surprisingly presidential.” Biden, however, did not get much positive feedback from documented undecided Americans.

However, information from Fox News exposes an interesting dichotomy between early voting and viewership for the final presidential debate.

The U.S. Election Project confirms that more than 52.7 million Americans have already cast their votes in the 2020 presidential election. This number arrives as multiple counties and states report record turnout levels in early voting.

As early voting has surged, viewership of the final presidential debate declined. The 63 million Americans who tuned in on Thursday still marks an over ten million drop from the 73 million-plus folks who watched the first presidential debate.

Early voting, combined with Thursday’s drop in viewership, seems to indicate that most Americans have made up their minds. This would explain why fewer Americans felt a need to watch the debate and hear the candidates go back and forth with one another.

There are precisely ten days remaining until the 2020 presidential election reaches its end.

While early voting is already garnering record turnout rates, there are still millions of Americans who have yet to cast their votes. Some will vote early, while others wait until Election Day.

Trump and Biden are each making their cases to the American people. The president seeks to decrease taxes for American workers and small businesses; meanwhile, Biden maintains that he will repeal Trump’s tax cuts if he wins the election.

The president states that America must reopen and allow our economy to revitalize; meanwhile, Biden is on the record with an admission that he’d “shut it down” if Anthony Fauci told him to do so.

The unique and stark contrasts between both major presidential candidates couldn’t be any plainer. Now, the people are voting on the type of America they want to live in.

Have you voted for your candidate in the 2020 presidential election yet? Did you watch the final presidential debate on Thursday night? Let us know in the comments section below!