The economy marks a major milestone in the 2020 presidential election. Jobs and employment took a major hit following coronavirus shutdowns. Now, as the economy reopens — or re-closes in some places — Americans are trying to get above ground and back to work.

Conservatives and Republicans are driving home the importance of the economy. This is why America First Policies, a right-wing non-profit, is calling upon Congress to work with President Trump on reviving the economy, reports Fox News. 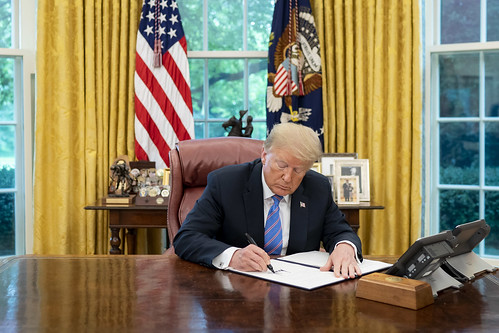 Conservative calls for Congress to work with Trump on the economy arrive as Republicans and Democrats remained deadlocked on appropriate legislation.

The Message from America First Policies

America First Policies is making its voice heard via ads. The ads will begin airing on Independence Day weekend with the nonprofit group spending four million dollars on getting the message out.

#USMCA replaces the failed, outdated NAFTA and brings our trade relationship with Canada and Mexico into the 21st century! 🇺🇸 🇲🇽 🇨🇦 pic.twitter.com/EVtEPtsNxP

Some specific measures endorsed by America First Policies include reducing payroll taxes, bettering trade deals, and bringing jobs back to the United States. These are each issues that President Trump has vocalized support for; however, many Democrats have pushed back on policies traditionally backed by conservatives.

In citing the need to get our nation’s economy “rolling back,” America First Policies explained that most people in the country support getting our nation back to prosperity.

Will Congress Work with President Trump?

Many Republicans in Congress are more than willing to work with President Trump. However, Democrats in Washington have put forth certain ideas and policies that are contrary to both the GOP and the president.

As time passes, the deadlock between Republicans and Democrats seems to be increasing. Last week, Republicans put forth a police reform bill; however, Democrats quickly shut it down. Leftist lawmakers have also opposed the president’s recent executive order to shield our nation’s statues, monuments, and memorials.

Getting the nation back on track via legislation will require some work and agreements between Republicans and Democrats. The amount of time needed to reach this point currently remains unknown. America First Policies maintains that the job of Congress should be to work with the president for the betterment of the nation and our people.

Do you think Congress will manage to put partisan differences aside and work with President Trump on the economy? How long do you think this process will take? Let us know down below in the comments section.