Coronavirus continues to weigh heavily in the political world, even as the United States progressively reopens for business.

Democrats remain relentless in their quest to attack President Trump and undermine the work of his administration. Rather than striving with the White House in the battle against COVID-19, left-wingers are more interested in trying to force socialist proposals through bills in Congress. 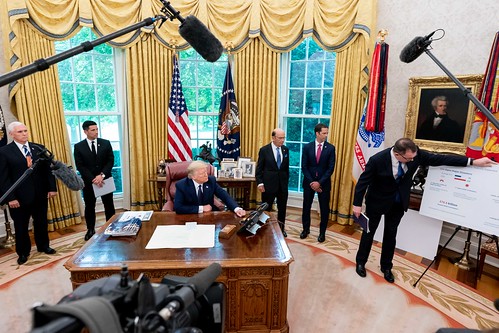 Yesterday, two-time failed presidential candidate Hillary Clinton took to Twitter to attack the president. Clinton responded to a retweet from President Trump which censured Democrats; in so doing, she claimed that the United States is in need of a “real president,” reports Fox News.

What to Know About the Latest Attack Against Trump

In keeping with the leftist way, Clinton asserted that the president bears responsibility for the 100,000-mark in U.S. coronavirus deaths. What the twice-unsuccessful presidential candidate declined to mention is that this number would be much higher if not for the work of Trump and his administration.

Nevertheless, Clinton claimed that 100,000 COVID-19 deaths happened in America “on Trump’s watch.” Then, she went after the president for his decision to retweet a video from a group calling themselves “Cowboys for Trump.”

He’s spent the last 24 hours sharing videos that begin "The only good Democrat is a dead Democrat" while complaining Twitter’s censoring him.

We need a real president. https://t.co/bqnPUACScf

Thank you Cowboys. See you in New Mexico! https://t.co/aCRJeskUA8

The latest dig from Clinton comes in a pattern of various insults and petty jabs. In March, she took aim at Trump’s “America First” policy after reports broke of the United States leading the world in COVID-19 cases.

He did promise "America First." https://t.co/bzks3hqCUE

This particular point prompted backlash, with Americans noting how a statement like this trivializes the lives suffering adverse impacts from coronavirus. As Clinton continues to speak out about coronavirus and the Trump administration, she has yet to note the steady decline of cases happening just about every day now.

What do you make of Democrats’ ongoing attacks against Trump’s work to beat coronavirus? What do you think about the progress of the Trump administration thus far? Sound off in the comments section below!