April has marked a pivotal point in the era of coronavirus. More than ever, tens of thousands of Americans are rising up against state shutdowns. Enough is enough; with 26 million people out of their jobs, as crime increases, people are realizing that simply telling everyone to stay home is not effective. 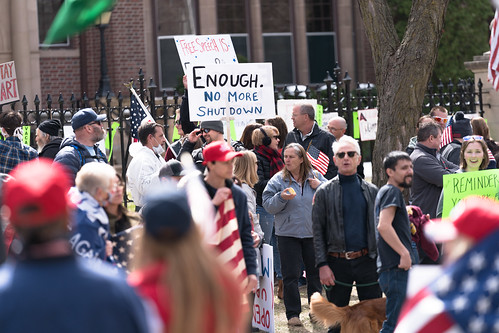 Governors across the nation are facing legal suits and protests as a result of issuing state lockdowns. There is no sign of rising social unrest coming to a head unless lockdowns are lifted and Americans are able to get back to work.

Yesterday in Illinois, Gov. Jay Robert Pritzker addressed his state’s residents about the COVID-19 situation. Washington Examiner reports that Illinoisans gathered in protest to demand a return of the state’s economy during Pritzker’s remarks.

A Closer Look at Yesterday’s Protest in Illinois

Yesterday, Illinoisans gathered at the State Capitol to inform their governor that they’ve had enough. Many of the protesters included Illinois business owners who are fighting to keep their establishments alive in the wake of shutdowns.

Stand up to #tyranny May 1st at noon, in Springfield and Chicago! #ReOpenIllinois @KashJackson2018 Thank you for supporting us!🇺🇸✊🏻 https://t.co/1ROuNxj0TZ

Illinois entrepreneurs explained that many of their businesses are suffering 85% losses, if not worse. In the push to get the economy reopened, Illinois residents expressed hope upon learning that at least one sheriff has refused to enforce Pritzker’s recently-extended stay home order. Yesterday’s protesters also wielded criticism against the new order for Illinoisans to wear face masks in public.

Illinois residents are far from done with protesting against Gov. Pritzker’s lockdown. Another protest is set to take place at The Thompson Center on Friday, May 1st at 12:00 PM. Like other Americans across the nation, Illinoisans want to get back to their livelihoods, businesses, and jobs.

Illinois patriots are planning to protest this extended deadline to force this do nothing gov to open up the state NOW! If you need details, DM me. #KAG #GOP3 https://t.co/hOAhoNnSdF

The Illinois governor and his counterparts in other states that haven’t lifted lockdown restrictions should prepare themselves for additional protests to come.

Do you think Gov. Pritzker will listen to the voices of Illinois residents? What do you think about the recent extension of his shutdown? Let us know your thoughts in the comments section below!