With less than 14 days left until Election Day, the Trump campaign and first family are traveling across the nation to drum up support and encourage Americans to vote.

Just yesterday, President Trump hosted a rally with supporters in Erie, Pennsylvania. During this rally, the president promised a return to normal, vowed to support the law enforcement community, and otherwise spoke about the importance of four more years. 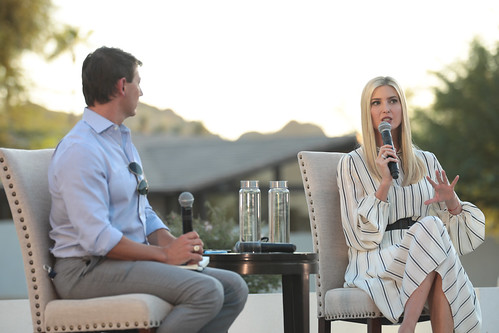 As the commander-in-chief continues hitting the campaign trails, his adult children are doing the same. Yesterday, first daughter Ivanka Trump spent time in the battleground state of Wisconsin.

A Closer Look at Ivanka Trump’s Visit to Wisconsin

While in Wisconsin, the eldest first daughter spoke with Mercedes Schlapp, a campaign adviser, in front of an audience of Trump supporters.

During this conversation, Ivanka Trump reminded the audience of her father’s promises to end food shortages and restore ten million jobs back to the U.S. economy within a ten-month timeframe.

The first daughter also talked about the importance of early voting and safely reopening the nation. Trump professed that the GOP, under her father’s leadership, is “the party of safe reopening.”

Wisconsin is an important battleground state in the 2020 presidential election. Numerous political analysts believe that the votes in this state will play a major role in whether or not President Trump wins another four years in the White House.

More Campaigning from the First Daughter

Like Wisconsin, Michigan is another battleground state that will have a notable impact on the 2020 presidential election’s outcome.

This is why the first daughter also visited Michigan earlier this week to campaign for her father’s re-election. While in Grand Rapids, Ivanka Trump spoke before an audience, discussing the policies that the president plans to carry out during a second term in office.

Trump additionally toured various facilities and was photographed with different Trump supporters and children in attendance. Similar to Ivanka Trump, first sons Eric Trump and Donald Trump Jr., are also traveling to different states to turn out the vote for their father.

What do you think about Ivanka Trump’s visits to Wisconsin and Michigan? Do you believe President Trump will win these battleground states in the general election? Share your predictions with us down below in the comments section.