Joe Biden’s candidacy for president of the United States has faced unique scrutiny. While presidential candidates are always under a microscope, the actions, words, and other elements surrounding Biden’s bid for the presidency have many Americans wondering about him.

Since the 2020 Democrat nominee’s decision to select Kamala Harris as his running mate, many theories have come up. One of the most prevalent theories asserts that if Biden wins the 2020 election, Kamala Harris will be the one truly in charge while Biden acts as an “autopen” commander-in-chief. 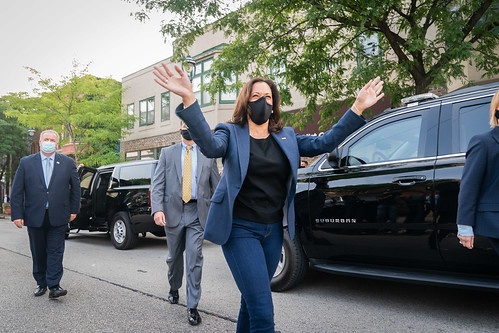 Yesterday, Harris fueled this theory when speaking with Arizona-based small business owners. The California senator spoke about a “Harris administration together with Joe Biden,” catching the attention of many Americans, confirms Fox News.

The Truth about a “Harris Administration Together with Joe Biden”

Harris’ Freudian slip arrived on Monday while she spoke with small business owners at a virtual roundtable event.

The Biden running mate then quickly tried to clean things up, following up by noting that the “Biden-Harris administration” will focus on investing in minority-owned businesses and providing $100 billion dollars in loans with very low-interest rates.

Harris has consistently taken a front-row seat in the Biden campaign, even though she is the running mate and not at the head of the ticket. For instance, it was the California senator, rather than Biden himself,  who issued a verbal rebuttal to President Trump’s acceptance speech at the GOP National Convention.

A Trojan Horse for the Far Left?

The Trump campaign and other conservatives have warned that Biden is merely a trojan horse for the far left to ascend to national power.

Harris maintains the most liberal voting record in the Senate; meanwhile, self-proclaimed socialist Bernie Sanders has already had a significant hand in the policies that Biden has vowed to enact.

Donald Trump knew how deadly COVID-19 was—yet he prioritized himself over the American people. pic.twitter.com/X44ywRdWR3

According to findings from Rasmussen Reports, nearly 60% of the nation does not believe that Joe Biden would successfully finish a first term in office. This would, by default, lead to a Harris administration with Nancy Pelosi as vice president.

Biden’s campaign has yet to publicly address the Freudian slip from his running mate yesterday. Harris, herself, also seems to be steering clear of drawing even more attention to the slip-up.

Do you think Joe Biden would be truly calling the shots if he won the election and made it to the White House? Let us know down below in the comments section!