Many schools across the nation have announced plans to kick off a new school year with online learning only.

Of course, Democrats have largely thrown support behind this, stating that it is not safe to reopen schools. This comes in spite of research-backed studies showing that children almost never spread COVID-19 amongst themselves. 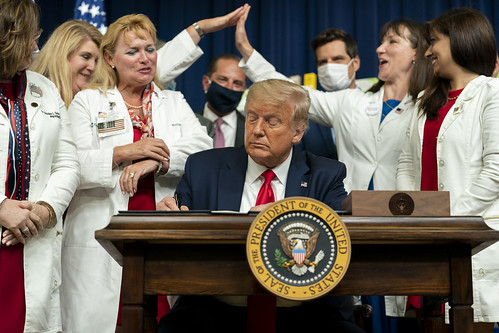 As time goes on, more Americans are beginning to question the immense leftist support for keeping schools and businesses shut down.

As it currently stands, many people view the Democrats’ push for shutdowns as a meticulous plot designed to hurt President Trump in the 2020 presidential election, confirms Fox News.

The Political Ramifications of Ongoing Shutdowns

Many teachers’ unions are presently calling for far-left proposals before schools are allowed to reopen.

These proposals entail defunding the police, enacting Medicare-for-All, increasing taxes on wealthy Americans, and much more; interestingly enough, none of these policies have to do with legimitate concerns about the safety of in-person education. The left-wing leanings of teachers’ unions are also no secret.

"We're 100 days out from the presidential election, the only objective Democrats have is to defeat Donald Trump and they've cynically decided best way to defeat @realDonaldTrump is shut down every business in America, shut down every school in America." — @tedcruz

Due to the politics at play, GOP Texas Sen. Ted Cruz has stated that school shutdowns are not about safety, but rather about swinging the election in the favor of Joe Biden.

When speaking with Face The Nation, the conservative senator admonished leftists for seeking to shut down schools and businesses in the United States as a means of killing Trump’s re-election chances.

Can Schools Safely Reopen in the Fall?

Per feedback and recommendations from health officials, there are multiple means for schools to reopen in the fall while still taking reasonable precautions.

Temperature checks for entry are possible, as is social distancing in classrooms, cafeterias, etc. As teachers’ unions demand far-left proposals before reopening schools, the mental, emotional, and social health of children remains caught in the crossfires as casualties.

BREAKING: @realDonaldTrump Says "If schools do not reopen, the funding should go to parents to send their child to public, private, charter, religious or homeschool of their choice…. If the school is closed the money should follow the student."#SchoolChoice pic.twitter.com/AZL2MH3FQX

Many Americans have noted that keeping schools closed will hurt lower-income or disadvantaged students. Young people who struggle with disabilities, tough environments at home, or mental health issues may also have a more difficult time with isolation and online learning.

For these reasons, both the Trump administration and conservatives across the nation are pushing for a safe, measured reopening of schools, while still taking actions to prevent the spread of COVID-19.

Do you believe that Democrats and teachers’ unions are intentionally pushing for closed schools to hand Biden the 2020 election? Do you think there are ways for schools to safely reopen this fall? Let us know down below in the comments section.