As unions, law enforcement associations, and others line up to endorse President Trump, Joe Biden is eager to get some endorsements of his own. 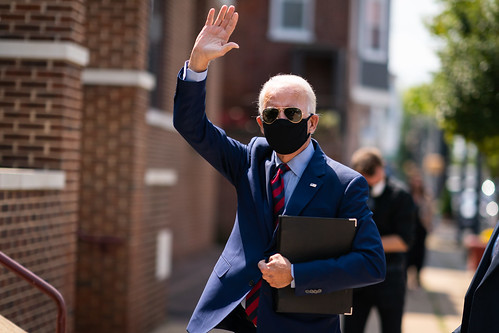 “Press Conference on the State of the US” (CC BY-NC-SA 2.0) by Biden For President

Days ago, however, former Michigan governor and ex-Republican Rick Snyder backed Joe Biden. The former GOP governor lauded Biden’s “moral character” among other things; although, this endorsement is generating negative feedback from individuals on the left side of the aisle, according to Breitbart News.

Why Snyder’s Endorsement Backfired on the Biden Campaign

After the endorsement from Michigan’s former governor, the Biden campaign quickly shined a light on this in a press release.

However, left-wing activists like Hollywood’s Michael Moore were not at all thrilled. In fact, Moore slammed the former vice president, accusing him of seeking out “white racist redneck votes.”

Moore also claimed that Biden should be seeking out the support from black Michiganders in Flint before urging the Biden campaign to remove the press release covering Snyder’s endorsement.

Neither the former vice president nor his campaign has openly responded to the statements from Michael Moore; additionally, the Biden team hasn’t indicated any plans to withdraw the press release noting the former Republican’s endorsement.

The Current State of the Biden Campaign

At this time, Americans are taking note of recent statements made by Biden’s running mate over the weekend.

During a CNN interview, Kamala Harris admitted that she and Biden may lose the election; of course, the California senator stated that interference from the Russian government would be responsible for the loss of Biden-Harris 2020.

Why do you think they don’t want us to vote? We all know the answer: It’s because they know when we vote, things change. When we vote, we will be seen, we will be heard, and elected officials will be held accountable. VOTE.

As figures on both the left and the right go after Joe Biden, the polls are also shifting out of his favor. Last week, a new survey showed Trump leading the former vice president in the battleground state of Florida; meanwhile, support for the president is also rising in the African-American and Hispanic communities.

What do you think about the current state of Joe Biden’s 2020 presidential campaign? Are you surprised to see certain folks on the left targeting the former vice president? Let us know what you make of it all down below in the comments section.