Michigan is one of several blue states that continues struggling in the fight to recuperate from coronavirus.

Countless businesses in Michigan have permanently shuttered thanks to Gretchen Whitmer’s decision to enforce repeated, draconian lockdowns that attracted bipartisan condemnation. However, this did not stop establishment Democrats from allowing the Michigan governor to speak at the Democratic National Convention last night. 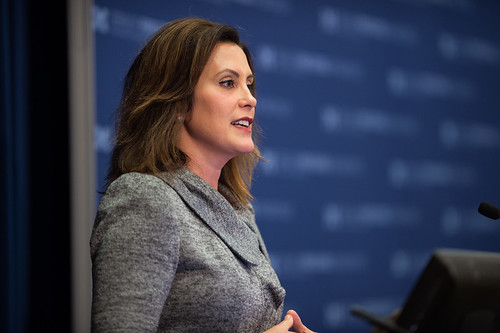 During Whitmer’s remarks, she went after President Trump and his administration while lauding the Michigan auto industry. However, one doesn’t have to dig very deep to learn that the auto industry is far from pleased with Whitmer, as noted by Townhall.

Why Isn’t the Auto Industry Pleased with the Michigan Governor?

Eric Welter, the leader of the auto industry union, recently explained as much. Welter noted that in order for auto industry workers to meet the needs of the market, they must be able to deliver products that are in demand.

Governor @GretchenWhitmer — thank you for your support and for meeting the COVID-19 crisis with the urgency it demands. The people of Michigan are lucky to have you leading the way. #DemConvention pic.twitter.com/ef2d4DldRV

Unfortunately, this became notably more complicated over the summer when Whitmer threatened to shut down businesses that aren’t enforcing her face mask edict to her liking.

In light of the Michigan governor’s negative impacts on the auto industry and its workers, many Americans found her decision to laud this industry within her DNC speech as curious.

More on the Michigan Auto Industry

Whitmer’s impact on the Michigan auto industry turned so crippling that Flint autoworkers wrote her a letter awhile ago.

In this letter, the autoworkers urged the Michigan governor not to shut down manufacturers; in addition to noting adherence to safety protocol, Flint autoworkers also pointed out that absolutely no science backs the notion of coronavirus acquisition or transmission in automotive factories.

Interestingly enough, the Michigan governor chose not to address these points when talking about how autoworkers “sprang into action” and created personal protective equipment.

All-in-all, the ultimate point of Whitmer’s speech was to endorse Joe Biden’s candidacy for president of the United States.

What did you think about the Michigan governor’s speech at the Democratic National Convention last night? Do you believe that Whitmer’s policies and shutdowns have harmed Michigan’s autoworkers? Tell us what you think in the comments section below!