Riots escalated in America on Sunday night, despite attempts to calm down rising social unrest and get people to cease violence.

President Trump himself has intensified criticism of elected officials who are watching their cities quite literally go up in flames. Moreover, the president warned that if local and state officials don’t get their act together and calm things down, the federal government will step in. 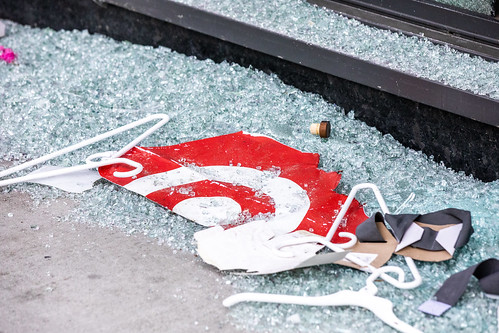 It appears as though many of these elected officials are either unwilling or unable to heed warnings from President Trump. Yesterday marked a series of new violent demonstrations, one of which happened in Lansing, Michigan, confirms Breitbart News.

What to Know About Riots in Lansing

Footage of the carnage inflicted upon the capital city of Michigan rapidly made rounds on social media, gaining instant shares and retweets:

One of the Lansing businesses to sustain notable damages was a Chase bank. In videos on social media, rioters and looters are seen throwing objects at the building, breaking glass, and cheering as the destruction took place. Onlookers also blew the horns on their vehicles while others captured the damages with their cell phones.

At this time, Gov. Whitmer has yet to issue a public statement about last night’s riots and destruction. This comes in spite of the Michigan governor issuing a stringent stay home order and previously vilifying protesters who gathered in peaceful protest at the State Capitol.

What do you think about the riots in Lansing last night? Do you believe the Michigan governor will issue a statement about the troublingly violent demonstrations in the state? Let us know in the comments section down below!