Joe Biden’s 2020 presidential campaign has largely worked to dismiss claims of him suffering from mental impairments or cognitive decline. Democrats, at least in the public eye, are also writing off such claims as baseless, right-wing talking points meant to discredit Biden. 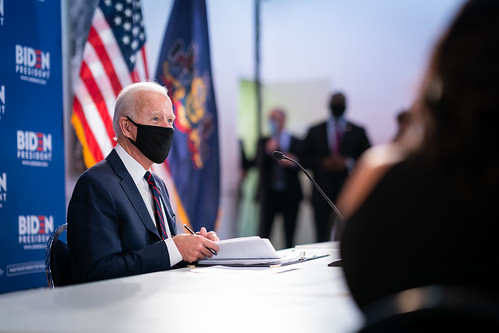 “Roundtable Discussion with Local Small B” (CC BY-NC-SA 2.0) by Biden For President

Try as they might, however, Biden’s aides and allies are not able to make these concerns go away. The fact that certain Democrats have come out and urged Biden not to debate President Trump is further evidence that concerns about Biden’s cognitive capabilities are not mutually exclusive to the right-wing.

A Closer Look at the Latest Trump 2020 Ads

In an ad lasting for 78 seconds, the president’s re-election campaign shows clips of Biden speaking publically in 2015 and 2016 before comparing this footage to Biden’s speech in 2020.

In the footage from prior years, the former vice president communicates clearly and articulately. He doesn’t stammer, stare off in space, or lose his train of thought; the “What Happened to Joe Biden” ad clips of Biden speaking this year highlight a very distinct difference.

Ads showing the differences in Biden’s speech and mannerisms also conveniently arrive as the Democrats have their national convention. On Monday and Tuesday nights, speakers spent their time lauding Biden’s character and stating that he will make a better president than Trump.

Tonight and Thursday night, more speakers are set to join the stage; these speakers will include Kamala Harris, Barack Obama, and others.

The Impact on the 2020 Election

Due to increasing concerns about Biden’s cognitive abilities, some Americans are already stating that electing Biden is tantamount to Kamala Harris becoming president.

Biden’s continuous slip-ups throughout this election have also led to people asserting that he ultimately wouldn’t finish his first term in office, either. Even the former vice president himself has praised Harris as being “ready to lead” the nation “on day one.”

When I was making my decision, I knew I needed someone who’s ready to help lead the nation on day one.@KamalaHarris is that person. pic.twitter.com/7PZUupy8Dm

Theories about Biden’s mental decline range from dementia to early onset Alzheimer’s and other prognoses. Nevertheless, Biden and his aides continue to maintain that there is no mental or cognitive decline on his end.

What do you think about the latest ads from President Trump’s re-election campaign? Do you believe a vote for Joe Biden is a vote for Kamala Harris as president? Let us know in the comments section below!