The 2020 presidential election continues to display the various differences between President Trump and Joe Biden.

The president is taking a very hardline stance against riots, looting, and the behavior happening in cities like Seattle, Kenosha, and Portland. Biden, on the other hand, remains more critical of police officers than of individuals who are quite literally torching communities. 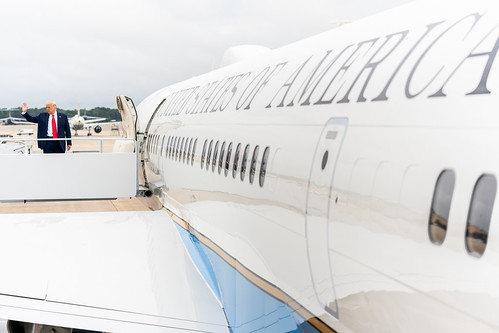 As of late, the former vice president has attempted to flip the narrative, claiming that Trump is enabling violence. Biden even asserts that if the 45th president wins re-election, the nation will continue to suffer from destruction.

Americans aren’t buying it and President Trump isn’t having it, though. As of this morning, the president’s re-election campaign released new ads that target Biden’s lackluster response to crime along with his concerning disposition towards law enforcement, confirms Breitbart News.

An Overview of the Latest Trump 2020 Campaign Ads

In a 30-second clip, Biden is slammed for “[taking] a knee” as “lawless criminals” terrorize various cities. While viewers get a look at the disturbing violence, the former vice president is seen looking dumbfounded as the narrator slams his “weak response.”

The ad also takes aim at the radical left before noting the president’s work to combat violence. From pointing out the provision of federal resources to Trump’s prioritization of jobs and communities, the ad sends a clear message that the president’s leadership is what’s best for the nation.

Another similar ad takes aim at Biden while focusing on his reactions to the violence in Kenosha, Wisconsin. The timely arrival of this ad comes after the former vice president criticized Trump’s choice to visit Kenosha earlier this week.

Where is Joe Biden?

Recent reports indicate that Biden is not planning to resume in-person campaigning until the 10th of this month. Such a call has prompted concerns from Democrats in the mainstream media; for weeks now, the left has warned that enthusiasm for the president is skyrocketing.

Biden has yet to respond to the latest ads from the Trump campaign. In addition to putting out new ads, the president’s re-election team is also seeking Biden’s written confirmation that he will participate in three debates against President Trump.

This quest for this confirmation comes after House Speaker Nancy Pelosi’s claims that Biden should renege on debating the president.

What do you think about the latest ads from President Trump’s campaign? Share your thoughts with us in the comments section below!