Yesterday night marked another series of violent riots and lootings in America. These demonstrations are being branded as means of protesting the Memorial Day 2020 death of George Floyd; however, most people are waking up to the reality that setting cities ablaze has nothing to do with Floyd. 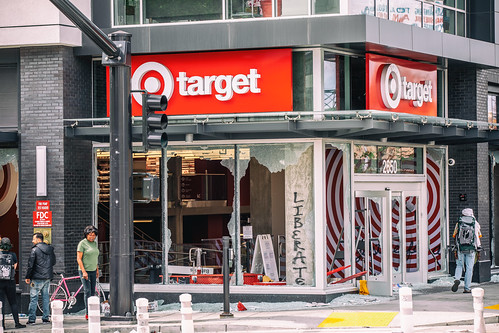 Prior to the riots on Monday night, the president addressed the nation. Trump warned that he will send in the United States military to handle these violent riots if demonstrators continue to loot, set fire, and tear cities apart.

It appears as though President Trump’s warning fell on the deaf ears of New York Governor Andrew Cuomo and New York City Mayor Bill de Blasio. Neither one of these elected Democrats managed to get their areas under control.

Monday night in New York City consisted of looting, vandalism, and rioters descending upon various businesses. Countless businesses, both high-end and low-end alike, were not spared from rioters who smashed windows, stole merchandise, and otherwise committed a series of crimes. Some of those crimes entailed assaulting and robbing innocent individuals in the area.

Reports of looting at multiple areas in New York City, including Manhattan and the Bronx.

Curfew will be put into effect at 11:00pm ET.pic.twitter.com/nQ1DRNKvyZ

Yesterday’s displays of violence and anarchy resulted in numerous arrests. According to a statement from the New York Police Department, more than 200 individuals have faced arrests and subsequent charges. It’s also important to know that riots were by no means exclusive to just New York City on Monday night.

What do you make of the carnage and destruction that plagued the streets of New York City last night? Do you believe President Trump will have to deploy the United States military? Let us know in the comments section below!