Over the weekend, the New York Times published a report regarding President Trump’s alleged taxes.

The report contains numerous assertions, including one alleging that Trump went between 10 to 15 years without paying federal income taxes. Likewise, the New York Times maintains that Trump used various business losses and expenses as write-offs to keep his tax bill as low as possible. 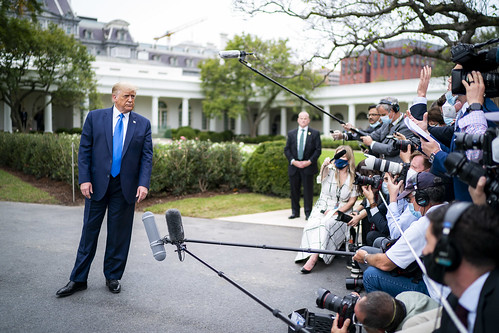 Democrats have descended upon the story put out by the Times; to be precise, they’re notably slamming the allegation that Trump only paid $750 in income tax in 2016 and 2017. Nonetheless, the president himself has come out in denial against the assertions of the New York Times.

The Truth About President Trump’s Taxes and Businesses

Don Jr. kicked off this Monday morning with an appearance on Fox & Friends. While speaking with the hosts, the president’s eldest son explained that tax return information is not mutually exclusive to the success of a business or its amount of paid taxes.

First and foremost, Don Jr. confirmed that his father has, in fact, “paid tens of millions of taxes” over the years. Shortly thereafter, the eldest first son explained that “historical tax credits,” depreciation, various tax write-offs, etc. are at play here.

Who leaked Trump’s tax returns to The New York Times?

If true—there should be felony charges leveled.

RT if DOJ should immediately investigate the Times and their sources!

Don Jr. also explained that many people don’t know or comprehend everything that comprises running a business. The first son then went on to remark that the New York Times intentionally put out a “selective” look at the president’s tax returns merely days before the first presidential debate.

Payroll taxes, property taxes, real estate taxes, salaries paid to workers, etc., are each factors that the New York Times declined to cover when intentionally putting out a certain narrative about the president’s taxes and businesses, noted Don Jr.

At this period, the New York Times has yet to reveal how they ascertained information about the president’s tax returns.

With that in mind, Americans should be aware that leaking unapproved information like tax returns is a crime. Some conservatives have already started calling for an official investigation into the Times to learn how they gained access to Trump’s tax information.

Democrats are mad at Trump because he followed the tax laws passed by the Obama administration.

It’s also critical to note that the report on the president’s taxes comes after news that Hunter Biden received $3.5 billion from a Russian billionaire and may have financial ties to human trafficking and prostitution rings.

What do you think about the New York Times’ report on President Trump’s taxes? Do you think the Times intentionally left out relevant details and released findings days prior to the first presidential debate for a reason? Let us know in the comments section below!