President Trump, his administration, and allies have been extremely busy this week. On Monday, Tuesday, Wednesday, and Thursday nights, multiple conservatives spoke at the GOP National Convention.

The speeches varied, with each individual providing their own reasons for supporting President Trump and four more years of him in office. Yesterday marked the first weekday that the Republican National Convention has not been in session. 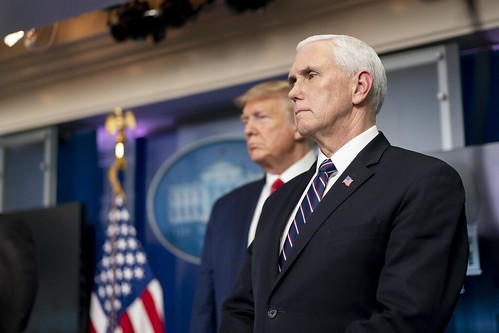 Despite the action-packed week, the president and his team are still hitting the bricks and doing the work.

What to Know About the Vice President’s Time in Michigan

While the vice president spent time in Traverse City yesterday, he spoke about the importance of the manufacturing and auto industries. Pence noted that re-electing President Trump will ensure the longevity and success of manufacturing jobs, especially amid the fight against coronavirus.

In spite of leftist mainstream media polls, the vice president informed Traverse City residents that the GOP is doing quite well in Michigan. A new survey actually shows that the president is ahead of Biden in the state while Michigan Senate GOP candidate John James is leading his Democrat opponent.

In just three short years, we created the greatest economy in the world, we Made America Great Again, and with four more years we’ll make Michigan and America stronger and more prosperous than ever before! 🇺🇸 pic.twitter.com/glffw8nkPV

Before leaving Traverse City, Pence talked about the Trump administration’s ongoing work to build a border wall, reduce taxes, and lessen regulations. The vice president also confirmed that the Trump-Pence 2020 ticket will remain committed to family, faith, law, and order.

The vice president then condemned looting, rioting, and Biden’s prior admission that he would defund police by “redirecting” money away from law enforcement.

While Trump and Pence campaigned in New Hampshire and Michigan yesterday, congressional Republicans also continued work to regain the House and maintain control of the Senate.

It has been 171 days since the last time Joe Biden was in Michigan, and it SHOWS: Just today, a poll came out showing President @realDonaldTrump winning in the Wolverine State! #MAGA pic.twitter.com/R8dlhd2av5

Republicans in both chambers of Congress have amped up censure of their Democrat colleagues, amid outbreaks of violence across the nation. Conservatives are not pleased with the lackadaisical attitude that the left has taken; Democrats’ insistence upon referring to arson, looting, and beatings as “peaceful protests” also isn’t sitting well with the GOP.

What did you think of the vice president’s remarks in Traverse City, Michigan yesterday? Do you think President Trump will win re-election this November? Be sure to let us know in the comments section below!