New developments continue to arise in the 2020 presidential election. Last night marked the one and only vice-presidential debate between Republican Mike Pence and Democrat Kamala Harris.

Both VP candidates sparred over a series of issues; these issues included, but were definitely not restricted to, the Supreme Court, abortion, healthcare, foreign policy, coronavirus, and more. 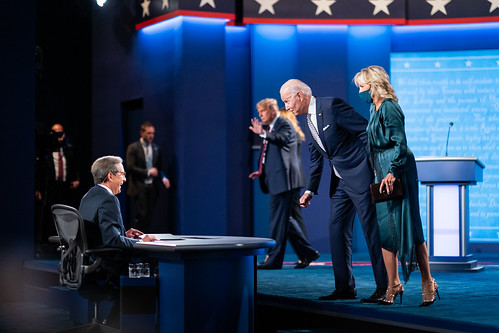 After the vice-presidential debate were two more scheduled presidential debates for October 15 and 22; however, the Commission on Presidential Debates announced this Thursday morning that the next debate between Trump and Biden will take place virtually.

President Trump responded to this news by asserting that he won’t engage in a virtual debate, according to Breitbart News; therefore, there is a strong likelihood that the second presidential debate won’t happen unless the commission allows for an in-person debate.

The Fate of the 2020 Presidential Debates

President Trump’s response to the Commission on Presidential Debate’s ruling arrived during an interview with Fox Business. The president explained that altering the debate’s format is “not acceptable” by any means. Trump also made sure to explain that he beat Biden during the first presidential debate, even with moderator Chris Wallace repeatedly coming to Biden’s aid.

Trump just now on Fox Business: "I’m not gonna do a virtual debate."

"I'm not gonna waste my time on a virtual debate." pic.twitter.com/VRiGNN7V9q

While speaking with Fox Business, the president was pressed about his refusal to debate with the host looking for a reason why. Trump, therefore, explained himself in no uncertain terms; per the president, virtual debates involve sitting behind a computer with a moderator being able to cut off debaters whenever they so choose.

The president also noted the anti-Trump, anti-Republican bias that moderators in 2020 debates have demonstrated thus far.

What to Expect on October 15

Amid news that President Trump won’t engage in a virtual debate, reactions are pouring in. Many Republicans believe that the Commission on Presidential Debate’s decision to change the debate format at the last second is suspicious. Others maintain that a virtual format will allow Biden to get help from his campaign aides during the debate.

1. Worked with Joe Biden’s Campaign on this decision.

2. They rushed this out to MOVE the news cycle on from Kamala getting crushed by VP Pence

Our political process is rigged & controlled by the swamp. It is NOT FOR THE PEOPLE👎 https://t.co/cxTnmNBz4e

Democrats on the other hand are unsurprisingly in favor of a virtual debate. They know that a format of this nature would work to Biden’s advantage and give him an easier time. As such, pro-Biden folks are urging for the former vice president to have the whole 90 minutes to speak to Americans on his own since President Trump won’t agree to a virtual debate.

What do you think about the notion of a virtual presidential debate? Why do you think the Commission on Presidential Debates changed the rules at the last second like this? We want to get your thoughts in the comments section down below!