Over the past several weeks, mainstream media outlets have made it a point to state that President Trump’s poll numbers are declining.

They’ve drawn attention to various surveys which show Democrat nominee Joe Biden leading Trump; the press has also cited the president’s response to COVID-19 and subsequent riots as the reasons for his apparent standing in the polls. 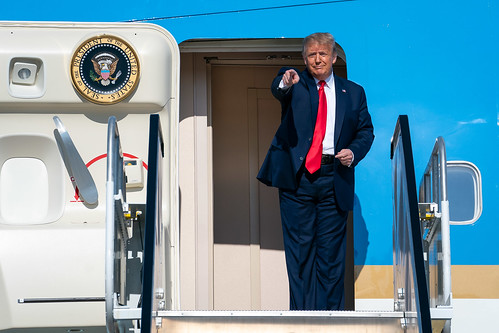 With that in mind, some Republicans are now speculating about whether or not President Trump will drop out of the 2020 presidential election. Fox News reports certain GOP strategist’s assertions that Trump could drop out if his poll numbers get low enough.

The president, however, has not provided any indication that he plans to drop out of the 2020 race. As a matter of fact, Trump’s re-election campaign remains highly active to this very date.

Why Are Some Republican Strategists Claiming Trump Could Drop Out?

Due to certain poll numbers that show President Trump trailing behind Joe Biden, some conservatives have concerns about Trump losing the election. Others have stated that if America goes into another shutdown, this will severely wound — if not completely eliminate — the president’s chances of winning a second term in office.

not convinced yet; he’s got time and he’s running against an opponent who is literally hiding in his basement. Plus the public isn’t focusing yet on just how left wing @JoeBiden has become, so much so, he can bring himself to denounce rioting.

This type of thinking has consequently led to claims that Trump might resign and cease running if he doesn’t improve in the polls.

Taking the Polls at Face Value

Some supporters of the president have pushed back on the notion that he’s thinking of dropping out of the race. Objectively, there is no substantial evidence to suggest that such an idea has ever crossed Trump’s mind.

Political history, especially the 2016 presidential election, proves the errorenous nature of taking poll numbers at face value. For one thing, polls are easy to manipulate and swing in a certain direction in order to craft a specific narrative; this happens all the time when a survey gets considerably more feedback from Democrat respondents than Republicans.

That said the speculation indicates how tense GOP operatives are about Trump losing and the party losing the senate and having their entire agenda abolished in a leftist wave election. Again lots of time and Trump has endured a horrible couple of months but that’s the snap shop

Do you believe that President Trump is thinking about dropping out of the 2020 race? Are Republican strategists who think he will right or wrong? Let us know in the comments section down below.