The Trump campaign has worked mightily in the state of Michigan to drum up support and ultimately get folks to vote for four more years of President Trump.

Similarly to certain other states, Michigan is an important battleground state in the 2020 presidential election; while Trump did win Michigan in 2016, Democrats are heavily targeting the state this go-around. 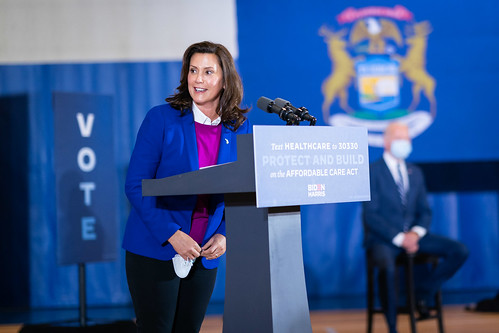 “Remarks on Healthcare at Beech Woods Rec” (CC BY-NC-SA 2.0) by Biden For President

Biden, too, has campaigned in Michigan several times, often with the state’s Governor Gretchen Whitmer, a Democrat, joining him. Whitmer has repeatedly declared that if people want to go back to church and otherwise resume their normal lives, then they must vote for Biden.

However, turnout at Trump rallies in Michigan continues to outclass the gatherings for Biden’s events. Now, first son Eric Trump has confirmed that his father’s campaign is confident in winning the state of Michigan on Tuesday, according to Breitbart News.

During an interview with The Kyle Olsen Show, the first son stated that Michiganders getting out and voting is what will ultimately swing the state in Trump’s favor. Eric Trump explained that by voting for the flag and for the USA, President Trump will “never let [Americans] down.”

If you need any information on how or where to VOTE, we have made it super easy! Just click the below link! https://t.co/E8r1OI2emp

While on The Kyle Olsen Show, Trump also talked about the importance of hard work. He compared the president’s hard work to the lack thereof of Joe Biden’s. During today alone, Trump will be traveling across five different states to host rallies and connect with Americans. Meanwhile, Joe Biden has repeatedly called lids on his campaigns.

Finally, Trump noted that enthusiasm and love of country are very much alive in Michigan. Like other members of his family, Eric Trump has repeatedly visited Michigan over the course of the 2020 presidential election.

The Importance of Getting Out the Vote

Unlike Joe Biden, the president and members of his campaign understand that getting out the vote is important. This marks a uniquely stark contrast from Biden who recently and strangely professed that he doesn’t need Americans’ votes to get elected.

Election Day arrives on Tuesday. Polls in the state of Michigan will be open and available from 7:00 AM to 8:00 PM.

Do you think President Trump will win Michigan’s electoral votes in the 2020 presidential election? Will Tuesday mark another election victory for the president? Let us know what you think in the comments section below.

CNN Anchor Out After Show Cancellation