The inaction of Portland Mayor Ted Wheeler is a huge problem here; it’s also a significant factor in why violence continues to ravage local streets and place innocents in extreme peril. 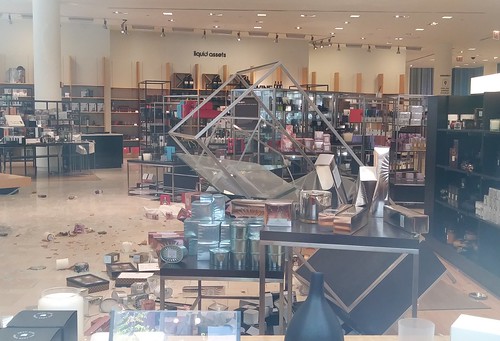 However, there is another factor at play here. Federal officials, including President Trump and Chad Wolf, the acting secretary of the Department of Homeland Security (DHS), have urged Wheeler to get his city in order.

When that didn’t work, federal troops were sent in to control the violence and bring it to a head. However, Mayor Wheeler is now engaging in deceit regarding the conduct and nature of demonstrators in Portland, per breaking news from Townhall.

Due to the shockingly dangerous acts of violence in Portland, the president is continuing to send troops into the city.

However, Wheeler is spreading an eyebrow-raising narrative, asserting that law enforcement is brutalizing peaceful protesters. This is simply not true and none of the looting, rioting, vandalism, etc. carried out by Portland demonstrators can be truthfully classified as peaceful protests.

Having the federal officers in Portland is the only reason the entire city hasn't been burned down to the ground!

This is why acting DHS secretary is holding Mayor Wheeler’s feet to the fire. While speaking with Fox & Friends, Wolf blasted the Portland mayor for telling “completely inaccurate” tales about the events in the city between midnight and five-o-clock in the morning.

A Pattern of Poor Leadership

Unfortunately, Portland is far from the only major city to be dominated by ceaseless violence. Likewise, Portland is one of many major cities under the control of Democrat leaders who are resisting and fighting against federal law enforcement officers.

Acting DHS Sec. Chad Wolf: “we’re going to continue to secure that courthouse…we’re not backing away from that”https://t.co/ATTjrv59cs pic.twitter.com/9oIgdayAFq

Despite the poor leadership in many of these cities, President Trump maintains that he will not allow this nation to burn to the ground. Right now, the president is working with federal officials to ensure that law enforcement has the resources and protections at their disposals to bring a once-and-for-all end to violence on these streets.

What do you think about the constant, night-after-night violence in Portland? Why do you believe the mayor is plainly lying about the nature of the demonstrators? Let us know down below in the comments section.