As the country reopens for business and gets back to normal, some Americans are eager to return to in-person gatherings and events. This comes after months of virtualizing interactions with others to phone calls, Zoom chatting conferences, and more. 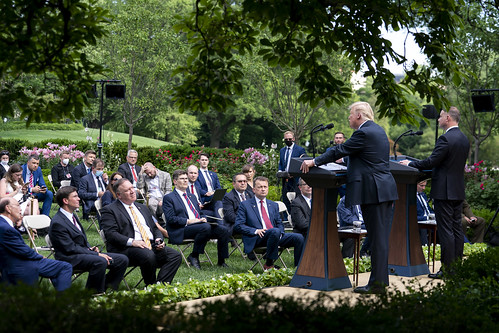 It turns out that the urge to resume in-person interactions includes political campaigns. Updates from Washington Examiner report that President Trump’s 2020 re-election campaign is focusing on reaching voters; unlike in recent months, volunteers with the president’s campaign are now knocking on doors.

In-person outreach from the Trump campaign comes as the president himself gets back to his rallies and gatherings.

In Wisconsin, strong supporters of the president are knocking on doors and encouraging people to vote for Trump.

Volunteers for the Trump re-election campaign have no concerns about COVID-19 transmission; in fact, they’ve cited the ability to partake in moderate physical distancing while still reaching out to people.

President @realDonaldTrump is brining jobs back to Wisconsin! pic.twitter.com/NLvLb2KvqM

Mark Jefferson, the chairman of the Wisconsin Republican Party, noted the importance of Americans having “individual choice” as America grapples with coronavirus. Jefferson also pointed out that while some people choose to wear face masks, others are more comfortable without them.

In Wisconsin, Trump volunteers are focusing on bringing swing voters over to President Trump. Both rural communities and suburban areas have proven to be quite promising thus far. More people are eager to get out and around others than some folks may realize.

As Trump volunteers and supporters get out and about, Democrats are not doing the same. In fact, many on the left are vilifying Wisconsin Republicans and others who choose to come outside of their homes and into the world.

Ben Wikler, the chairman of the Wisconsin Democrat Party, recently professed that left-wingers are not going to turn into “a public health menace.”

Yesterday, the president himself spent time in Wisconsin. Earlier this week, Trump discussed increasing jobs, military investments, and more. The president also made it a point to laud the merits of patriotism, “industrial heritage,” and strong defense. At this time, the investments and actions taken by the president are set to generate at least 1,000 new jobs.

What do you think about the Trump campaign returning to in-person outreach? Would you be willing to knock on doors and have face-to-face interactions with other Americans? Let us know in the comments section below.