As this year’s presidential election continues to play out, the left is pulling out all stops to interfere with Trump winning a second term in office.

From lies about the president’s policies, history, administration, etc., Americans are seeing that there is no level that Democrats won’t stoop to. The left has repeatedly been caught in lie after lie about the president; yet, it doesn’t seem to end. 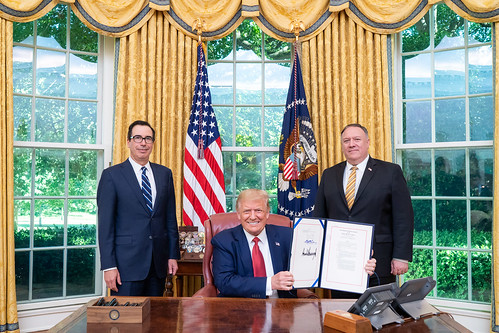 One of the latest mistruths deals with the assertion that President Trump is somehow against the military and distrustful of American intelligence agencies.

In the wake of Democrats spreading these lies, U.S. Secretary of State Mike Pompeo came out to set the record straight, according to Fox News.

During an interview with Fox News, the secretary of state pushed back against various narratives designed to hurt President Trump for political reasons.

Pompeo explained that the work to brand Trump as “anti-military” simply doesn’t align with reality, truth, or facts. The secretary of state went on to say that the president has the utmost respect for the U.S. military and for the U.S. intelligence community.

Good stop in Wisconsin today. Engaging with the American people on our foreign policy priorities is paramount, especially as we correct the record on the Chinese Communist Party's disinformation. My message was simple: we won't allow the CCP to interfere in our domestic politics. pic.twitter.com/ln8WUtsnod

Finally, Pompeo touched upon whether or not he believes the media even has an understanding of where the Trump administration stands on foreign policy.

Per the secretary of state, if the media does, in fact, have this knowledge, then they are responsible for “willful deceit” in how they convey information to Americans.

The timing in narratives to assert Trump as anti-military is ironic.

Just last week, an old video of Biden insulting servicemembers while speaking to them resurfaced. The footage is from early 2016 and shows Biden referring to military members as “a dull bunch,” “stupid bastards,” and “slow.”

Since the resurgence of this video, the former vice president’s campaign confirmed that this footage is, in fact, real. The Biden campaign then sought to write it off as remarks made in jest; however, most Americans aren’t buying this.

"Voting for Joe Biden isn't about whether you agree with him. It's about letting corporations, banks, and the military continue to run the country while you get absolutely nothing and we pretend this is a democracy. Don’t forget, orange cheetoh man bad."-@AOC pic.twitter.com/g1gQtMhJpY

If President Trump “joked” about members of the Armed Forces being “slow” or “dull,” let alone “stupid bastards,” the media wouldn’t treat it as remarks made in jest. Therefore, many Americans believe that Biden shouldn’t be given a free pass merely because of his affiliation with the Democrat Party.

Do you think the left will continue spreading conspiracy theories about the president’s stance towards the military and intelligence communities? Let us know in the comments section below!