Last Friday, Americans learned that several leaders and aides within the White House tested positive for COVID-19. These individuals included, the president, first lady, and several other staffers. 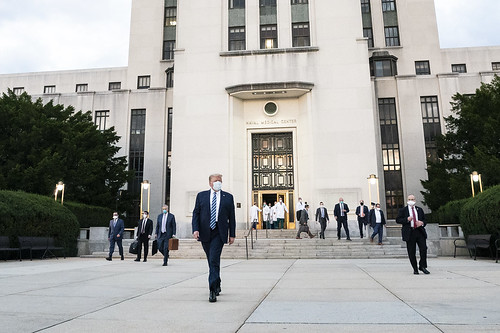 Hours after news of Trump’s positive diagnosis, he was transferred to Walter Reed Hospital. Then, on Monday, the president was released from the hospital and returned to the White House. Over the course of this week, Trump has put out a series of videos to keep Americans updated on his progress and recovery from the virus.

The president keeps sharing good news and apparently, he’s not the only one with positive outlooks on his medical wellbeing. According to Fox News, Dr. Sean Conley has given Trump an official clearing for participation in public engagements.

The Green Light for Public Engagements

Yesterday, Dr. Conely confirmed that President Trump is all clear to engage with the public. The White House doctor cited this weekend as a timeline for when the president can get back out among the people again.

Getting medically cleared for public engagements is good news for the Trump campaign. In light of Dr. Conley’s decision, Trump is working on setting up rallies with supporters in Pennsylvania and Florida.

On Thursday, the 15th, Trump was set to debate Joe Biden for a second time; however, since the Commission on Presidential Debates announced that the next Trump-Biden showdown has to be virtual, the commander-in-chief stated that he won’t engage in a virtual debate. Instead, the president may hold a rally during what would’ve been the debate period.

Today, President Trump will undergo another test for COVID-19. Moreover, the president is set to appear on Fox News’ Tucker Carlson Tonight for a video interview this evening.

Last week’s news that the president contracted COVID-19 rapidly threw the rest of the 2020 presidential race into question. Americans wondered whether or not the president would be able to be around others or campaign across the country.

President @realDonaldTrump: I thought @Mike_Pence was great at the #VPDebate, "we really are a good combination" pic.twitter.com/9ZQAmtwFw7

This week, however, Vice President Mike Pence has assumed a more prominent role in the Trump campaign. On Wednesday night, Pence debated Biden running mate Kamala Harris in Utah. Yesterday, the vice president then spent time speaking at a pro-Trump rally in Nevada.

Due to his medical clearance, new Trump rallies may be arriving as soon as this weekend and leading up to November 3.

Are you glad that President Trump has received official medical clearance for public engagements? Let us know down below in the comments section.