As the nation gets closer and closer to November 3, the presence of the silent majority is becoming more and more apparent.

During numerous Trump rallies, the president’s supporters have shown up hours, if not days, ahead of time to attend. When Trump went to Walter Reed Hospital, his supporters stood outside of the building with pro-Trump signs as a show of solidarity. 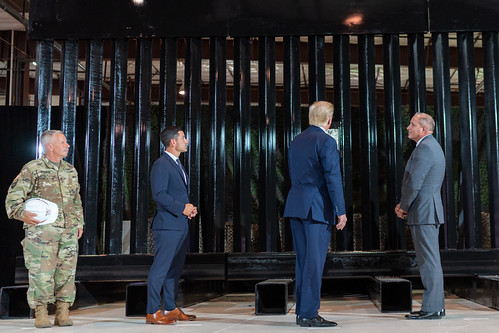 “President Trump in Arizona” (Public Domain) by The White House

It’s no secret that Trump’s base maintains unparalleled enthusiasm for him and as of late, the polls are beginning to swing in President Trump’s direction.

According to Breitbart News, a fresh poll surveying Arizona shows Trump winning in the state by several percentage points.

The latest Arizona poll conducted by the Trafalgar Group shows that Trump comes in at 47.8% support, while Biden trails the president at 43.8%. It’s important to remember that Arizona is another important battleground state that will significantly impact which candidate is the winner of the 2020 presidential election.

For months, all Joe Biden talked about was peaceful protesters, as the American people watched businesses & communities in our major cities burn. Under President @realDonaldTrump, we will have law & order in every state in this Nation for EVERY AMERICAN, so help us God. 🇺🇸 pic.twitter.com/nhOOpnIb8m

Ultimately, the president’s lead in Arizona also mirrors a recent poll showing him ahead of Biden in Florida. The Sunshine State is another key state in the 2020 election and one that Biden’s campaign has directed some focus towards. Americans should also remember that Trump won both Arizona and Flordia during the 2016 presidential election.

Meanwhile in the Biden Camp…

As President Trump dominates in polls and gets ready to return to the campaign trail, Biden is continuing to attack the president regarding his management of COVID-19.

This has become a pattern in the 2020 election; however, the talking points espoused by the former vice president are pretty repetitive at this point. Biden continues to fault Trump for the current number of coronavirus deaths, stating that the current White House administration did nothing to stop or slow the spread.

Over 213,000 Americans have died from this virus — and the hard truth is it didn’t have to happen this way. pic.twitter.com/27TL7PAhCi

Such claims are, of course, irrevocably false. Even Democrat governors like California’s Gavin Newsom and New York’s Andrew Cuomo have lauded the Trump administration’s response to COVID-19.

As a matter of fact, both the Trump administration and White House coronavirus task force have worked overtime to supply states with coronavirus tests, personal protective equipment (PPE), and much more.

What do you think about President Trump’s lead over Biden in Arizona? Do you believe that the 2020 presidential election will mark a landslide victory for Trump? We want to get your thoughts on the election down in the comments section below!