In issuing lockdowns, governors have gone to unbelievable lengths in ordering Americans to stay home and not work, while refraining from gathering in groups or practicing their faith. As a result of this, countless Democrat governors are facing multiple lawsuits from diverse groups and individuals alike.

Constitutional rights do not end where a pandemic begins. Again, this is a matter that Democrat governors seem to have forgotten, especially in cases where they’ve decreed against allowing religious gatherings. 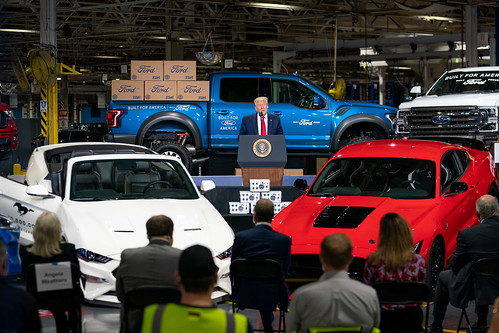 “President Trump in Michigan” (Public Domain) by The White House

Americans are gradually pushing back and so is President Trump. On Friday, the president stated that governors must reopen places of worship. Furthermore, Trump warned that if governors fail to do this, he will override their Executive Orders, reports Fox News.

Upholding the Right to Freedom of Religion

In spite of a virus that is mild in 80% of all cases, freedom of religion remains a constitutional right in the United States. This is why President Trump announced yesterday that new CDC information will list various houses of worship as essential. With this new classification, governors will have to reopen these places and allow faith gatherings.

The president delivered the above announcement while speaking to reporters at the White House. He also stressed the importance of faith and prayer, stating that more of these things, rather than less, are necessary in America.

Trump announces houses of worship are ‘essential,’ calls on governors to open them up. "The governors need to do the right thing and allow these very important essential places of faith to open right now–for this weekend…If they don't do it I will override the governors." pic.twitter.com/QWZXgOUed1

Trump’s remarks arrived after relayed concerns from religious leaders. Many people of faith are struggling in present times, with the inability to worship only worsening matters. Earlier this week, the president also spoke with hundreds of religious leaders over a conference call to hear their concerns and communicate his support for the faith community.

What do you make of President Trump’s vow to override governors if they don’t reopen places of worship? Sound off in the comments section below!