The United States of America is gradually and rightfully beginning to reopen for business. At the behest of health officials, Americans engaged in the shelter-in-place orders to flatten the curve of coronavirus.

As we now know, the curve has flattened; as a matter of fact, it’s flattened so much that hospitals don’t have enough work to keep nurses or other healthcare workers on board. 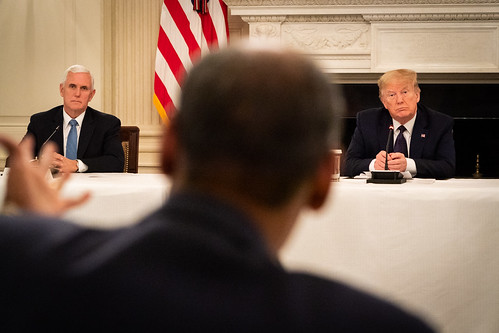 In light of this, governors across America are putting forth and implementing various plans to re-engage their economies. Even certain Democrat governors, such as Michigan’s Gretchen Whitmer and Wisconsin’s Tony Evers, are realizing that they cannot keep their states locked down indefinitely.

During a conference call with America’s governors yesterday, President Trump warned that the federal government will intervene if they observe “something going wrong,” according to Fox News.

What to Know About Trump’s Message to U.S. Governors

The president’s warning to governors took place yesterday while he engaged in a conference call. According to audio transcripts of the conversation, Trump informed governors that he’s pleased with gradual decisions being made about reopening.

However, the president also stated that the federal government will intervene if “we see something wrong.” Trump also acknowledged that although some individuals may disagree with federal intervention, it will take place in the event that “something [is] going wrong.”

During additional remarks, the 45th president urged governors to let him know if they’re having any issues in their states.

Joining the president on the conference call was First Lady Melania Trump. The first lady urged our nation’s governors to focus on mental health and ways that federal governments can work with states on mental health matters, especially those pertaining to children.

What do you think about President Trump’s message to governors across the nation? Should the federal government intervene if states refuse to reopen in a reasonable time period? Don’t hold back in the comments section below!