Since the inception of Trump’s political rise, he has shown support for the law enforcement community. 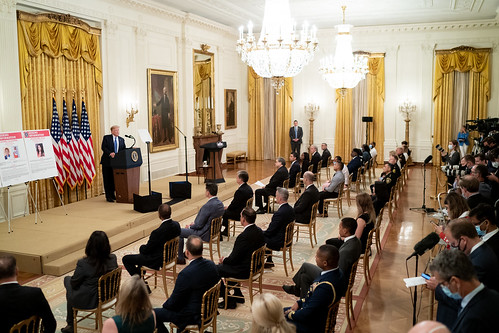 Law and order plays a vital role in our society as we know it. Sadly, this role is being threatened as more Democrats actively defund police departments across the nation. Just earlier this week, Michigan Governor Gretchen Whitmer withdrew $115 million dollars from the Michigan State Police; this served as a steep nearly-25% reduction from the unit’s overall budget.

As Trump continues to stand by police, law and order, this is paying off. Just yesterday, the Police Officers Association of Michigan endorsed the president’s re-election campaign, confirms Breitbart News.

In a statement, the law enforcement group praised Trump for opposing measures that would weaken police officers and block them from effectively protecting and serving.

The Police Officers Association of Michigan also noted that unlike Trump, Biden has caved to leftist calls to defund the police. Therefore, the group stated that the 2020 presidential election serves as one where the two opponents don’t “share many opinions and goals.”

In additional parts of the statement, the law enforcement group noted Democrats’ permissive stance towards arson, looting, and outright attacks against police across the nation. Finally, the Police Officers Association of Michigan noted that Trump has “[defended] and [stood] with our heroes” amid unspeakable and meticulous attacks from the left.

The Politicization of Policing

Like many things in America, the act of policing has become heavily politicized. While top Democrats enjoy protection from their own security details, they continue to come out against police officers.

Several congressional Democrats have stood before legislative bodies, urging everyone to “re-imagine” an America without police presence. Joe Biden himself has openly stated that funding should be “redirected” from police departments. The mayors of New York City and Los Angeles have already withdrawn funding from their local police departments.

In light of the left’s new attitude towards law enforcement, it will not be shocking to see more police groups come out and endorse President Trump. The 45th president maintains that America will never defund the police so long as he remains in the White House.

What do you think about the Police Officers Association of Michigan’s endorsement of President Trump? Do you think more law enforcement groups will come out and back Trump’s re-election campaign? Let us know down below in the comments section.