Twitter Removing Posts that Call for Death of Trump

Friday’s news that President Trump has tested for coronavirus triggered a series of reactions. Later yesterday, Americans also learned that other individuals in close proximity to the president received positive diagnoses; some of these individuals include, but are not limited to, Hope Hicks, first lady Melania Trump, Kellyanne Conway, etc.

Following the news that Trump tested positive for the virus and was subsequently transferred to Walter Reed Hospital, Biden’s campaign announced the decision to suspend anti-Trump ads. While certain top Democrats such as Kamala Harris and Barack Obama publically wished the Trumps a good recovery, not everyone on the left modeled this behavior. 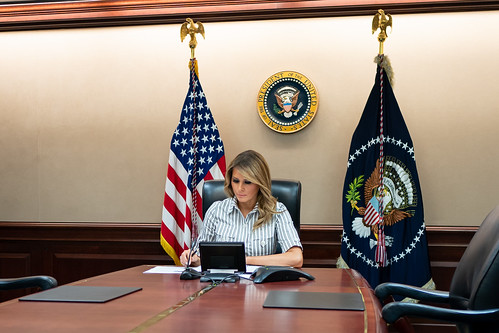 In the news that Trump has COVID-19, various people have taken to social media to wish death upon the president. Yesterday evening, Twitter announced that any tweets calling, wishing, or hoping for the death of the 45th president will be removed from the site, according to Washington Examiner.

Hateful and vicious tweets urging for the president to die from coronavirus started on early Friday morning, upon the announcement of the diagnosis. The presence of this content prompted backlash from conservatives, especially since Twitter has removed much less extreme content that they allege violates their terms and services agreement.

In this case, though, it appears as though Twitter got the message. On Friday, the social media site confirmed that posts “[wishing], [hoping] or [expressing]” an interest in “death, serious bodily harm, or fatal disease” are not allowed.

Twitter furthermore confirmed yesterday that tweets of this nature involving the president are not exempt. Whether or not accounts that post these messages also face suspension will ultimately depend upon “a number of factors.”

Some of the individuals tweeting out hate and death wishes towards the president have since deleted these posts after backlash. Other posts of this nature which remain up should be taken down, assuming that Twitter stands by its word.

On Friday night, House Minority Leader Kevin McCarthy (R) informed via social media that he spoke with President Trump over the phone. The GOP Leader furthermore noted that Trump is strong and will ultimately prevail against the virus.

I just got off the phone with President Trump. He was upbeat and told me that he appreciates all the prayers and support from everyone.

Our president is strong and will beat the virus!

Nearly one hour after this update, President Trump himself also posted to social media. The 45th president informed the nation that things at Walter Reed Hospital are “going well” and sent out a thank you message to the American people.

Are you glad that Twitter will remove posts that call, wish, or hope for President Trump’s death? We want to know your thoughts in the comments section below!