The Trump administration and federal government are vowing to take action against the anarchy which has plagued American streets for weeks now.

As rioters tear down statues, incinerate police cars, loot businesses, and more, claiming these acts to be the name of racial justice doesn’t make them any less illegal. In the beginning, President Trump called upon local and state officials to act accordingly. When Democrat mayors and governors declined, Trump announced the emergence of federal intervention. 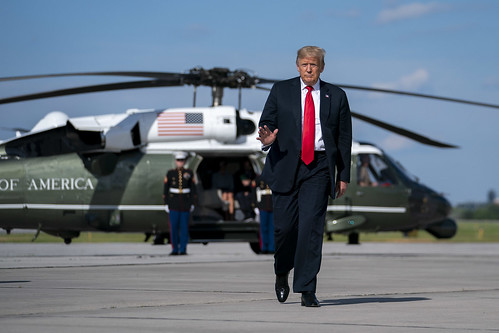 Individuals who vandalize or desecrate federal memorials can now face ten years behind bars. States, localities, and police departments that fail to stop them are also liable to lose federal grants and funding.

However, this is only the beginning of action being taken against rioters and anarchists in the streets. The federal government has begun creating and virtually distributing flyers of individuals who commit the aforementioned crimes, as documented by Breitbart News.

An Update on Federal Action Against Rioters and Anarchists

Flyers of rioters, looters, and other criminals are currently posted across President Trump’s social media platforms.

These flyers specifically state that the United States Park Police is working with the FBI’s violent crimes task force to locate individuals responsible for vandalizing the Andrew Jackson statue at Lafayette Square.

Individuals who are aware of the criminals’ whereabouts are thereby urged to call the U.S. Park Police’s TIP line at (202)-610-8737 or the Washington Field Office of the FBI. Many persons featured on these flyers appear young and able-bodied. Some have face masks while others do not.

This latest move marks a significant milestone after President Trump’s promise of federal action against those who loot, riot, and vandalize.

As law enforcement takes actions against criminals, they are making sure to note the difference between peaceful protests and violent riots.

In Washington, DC some protesters have exercised their constitutional right to peaceably assemble, while others have engaged in blatant criminal activities. US Park Police and law enforcement officials have endured continued violence. pic.twitter.com/ZyjznZ8VDE

Americans have the constitutional right to peaceably assemble; no one is denying this, but what people don’t have the right to do is loot, riot, and rip down monuments that offend their sensibilities.

The United States Park Police presently maintains that law enforcement officers themselves have been brutalized by rioters and others looking to commit crimes. More news of arrests is likely to come as the police continue doing their jobs and finding individuals who have committed crimes in recent weeks.

What do you think about the flyers from the United States Park Police? Will federal action stop rioters and looters? Let us know what you foresee happening in the comments section below!