Critics of President Trump have made a habit of repeatedly, yet incorrectly, predicting his political downfall.

When Trump first ran for president last election cycle, the left claimed he would eventually drop out. Then, when Trump secured the Republican Party’s nomination, Democrats professed that Hillary Clinton would easily beat him and go on to become president. 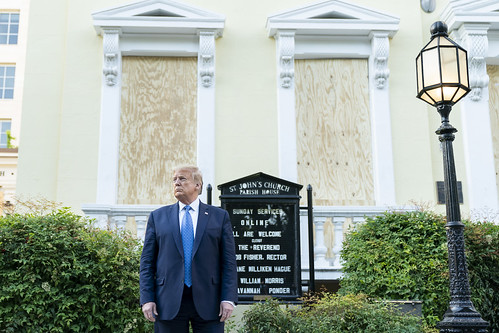 Ever since Trump’s ascension to the Oval Office, left-wingers have attempted to take him down, but to no avail. The Russia collusion hoax didn’t work; neither did the impeachment sham.

With the 2020 presidential election among us, Democrats are back to claiming that Trump will lose to his general election rival. According to Breitbart News, the latest person to make this claim is George Will, a writer for the Washington Post.

Why Do Leftists Believe Trump Will Lose 2020?

Yesterday, George Will appeared on MSNBC in order to discuss his predictions for the 2020 election. After fielding a question about whether Republicans will lose the Senate and abandon support for Trump, Will gave a curious answer.

According to the Washington Post writer, Republican voters will forget about the president after his supposedly-forthcoming election loss. Will also claimed that the GOP won’t even recognize Trump’s name “the next morning” after Election Day. In making these assessments, Will declined to cite why he believes the president will face defeat in this election.

However, the writer did offer his assessment of the GOP as a party. Will claimed that Republicans are collectively in need of a “time-out” and have one coming their way following Election Day.

Finally, the MSNBC interview concluded with Will predicting that the Republican Party will ultimately “survive.”

Do you agree with the prediction of the liberal Washington Post writer? Do you think President Trump will win or lose the 2020 election? Sound off with your thoughts in the comments section below!